The first quarter was a breeze as Powell pivoted, and China seemed eager to reach a deal with Trump. Both the S&P 500 and Russell 2000 delivered very strong gains as a result, with the Russell 2000, which is composed of smaller companies, outperforming the large-cap stocks slightly during the first quarter. Unfortunately sentiment shifted in May as this time China pivoted and Trump put more pressure on China by increasing tariffs. Hedge funds’ top 20 stock picks performed spectacularly in this volatile environment. These stocks delivered a total gain of 18.7% through May 30th, vs. a gain of 12.1% for the S&P 500 ETF. In this article we will look at how this market volatility affected the sentiment of hedge funds towards Urban Outfitters, Inc. (NASDAQ:URBN), and what that likely means for the prospects of the company and its stock.

Is Urban Outfitters, Inc. (NASDAQ:URBN) a safe investment now? The best stock pickers are becoming less confident. The number of long hedge fund bets were trimmed by 3 in recent months. Our calculations also showed that URBN isn’t among the 30 most popular stocks among hedge funds. URBN was in 25 hedge funds’ portfolios at the end of the first quarter of 2019. There were 28 hedge funds in our database with URBN holdings at the end of the previous quarter.

What have hedge funds been doing with Urban Outfitters, Inc. (NASDAQ:URBN)? 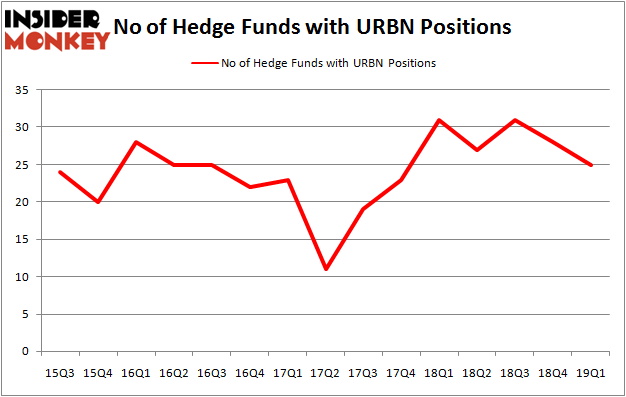 When looking at the institutional investors followed by Insider Monkey, AQR Capital Management, managed by Cliff Asness, holds the most valuable position in Urban Outfitters, Inc. (NASDAQ:URBN). AQR Capital Management has a $133.2 million position in the stock, comprising 0.1% of its 13F portfolio. Sitting at the No. 2 spot is Jim Simons of Renaissance Technologies, with a $71.4 million position; 0.1% of its 13F portfolio is allocated to the company. Other members of the smart money with similar optimism encompass Peter Rathjens, Bruce Clarke and John Campbell’s Arrowstreet Capital, Ken Griffin’s Citadel Investment Group and Ray Dalio’s Bridgewater Associates.

Due to the fact that Urban Outfitters, Inc. (NASDAQ:URBN) has faced a decline in interest from the smart money, it’s easy to see that there were a few hedgies who sold off their entire stakes last quarter. It’s worth mentioning that Principal Global Investors’s Columbus Circle Investors dumped the biggest stake of the “upper crust” of funds tracked by Insider Monkey, worth close to $22.8 million in stock, and Doug Gordon, Jon Hilsabeck and Don Jabro’s Shellback Capital was right behind this move, as the fund said goodbye to about $11.3 million worth. These bearish behaviors are important to note, as total hedge fund interest fell by 3 funds last quarter.

As you can see these stocks had an average of 18.75 hedge funds with bullish positions and the average amount invested in these stocks was $245 million. That figure was $415 million in URBN’s case. Five9 Inc (NASDAQ:FIVN) is the most popular stock in this table. On the other hand Mercury Systems Inc (NASDAQ:MRCY) is the least popular one with only 15 bullish hedge fund positions. Urban Outfitters, Inc. (NASDAQ:URBN) is not the most popular stock in this group but hedge fund interest is still above average. This is a slightly positive signal but we’d rather spend our time researching stocks that hedge funds are piling on. Our calculations showed that top 20 most popular stocks among hedge funds returned 1.9% in Q2 through May 30th and outperformed the S&P 500 ETF (SPY) by more than 3 percentage points. Unfortunately URBN wasn’t nearly as popular as these 20 stocks and hedge funds that were betting on URBN were disappointed as the stock returned -23.5% during the same period and underperformed the market. If you are interested in investing in large cap stocks with huge upside potential, you should check out the top 20 most popular stocks among hedge funds as 13 of these stocks already outperformed the market so far in Q2.