Ultragenyx Pharmaceutical Inc (NASDAQ:RARE) was in 18 hedge funds’ portfolios at the end of March. RARE investors should be aware of an increase in hedge fund interest of late. There were 14 hedge funds in our database with RARE holdings at the end of the previous quarter. Our calculations also showed that rare isn’t among the 30 most popular stocks among hedge funds.

If you’d ask most traders, hedge funds are perceived as underperforming, outdated investment vehicles of years past. While there are greater than 8000 funds trading today, Our experts look at the leaders of this club, approximately 750 funds. These hedge fund managers orchestrate the lion’s share of the smart money’s total asset base, and by paying attention to their top stock picks, Insider Monkey has found various investment strategies that have historically outperformed the S&P 500 index. Insider Monkey’s flagship hedge fund strategy defeated the S&P 500 index by around 5 percentage points annually since its inception in May 2014 through the end of May. We were able to generate large returns even by identifying short candidates. Our portfolio of short stocks lost 30.9% since February 2017 (through May 30th) even though the market was up nearly 24% during the same period. We just shared a list of 5 short targets in our latest quarterly update and they are already down an average of 11.9% in less than a couple of weeks whereas our long picks outperformed the market by 2 percentage points in this volatile 2 week period.

What have hedge funds been doing with Ultragenyx Pharmaceutical Inc (NASDAQ:RARE)? 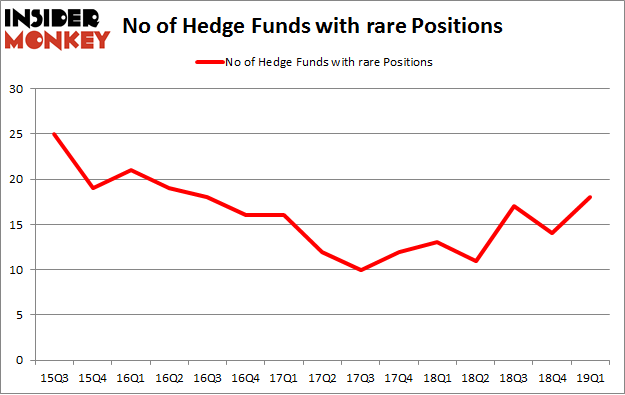 The largest stake in Ultragenyx Pharmaceutical Inc (NASDAQ:RARE) was held by Alkeon Capital Management, which reported holding $102.1 million worth of stock at the end of March. It was followed by Citadel Investment Group with a $67.6 million position. Other investors bullish on the company included Highline Capital Management, Rock Springs Capital Management, and EcoR1 Capital.

Now, key money managers have been driving this bullishness. EcoR1 Capital, managed by Oleg Nodelman, assembled the most outsized position in Ultragenyx Pharmaceutical Inc (NASDAQ:RARE). EcoR1 Capital had $34.5 million invested in the company at the end of the quarter. Joseph Edelman’s Perceptive Advisors also made a $3.5 million investment in the stock during the quarter. The other funds with brand new RARE positions are Benjamin A. Smith’s Laurion Capital Management, Michael Platt and William Reeves’s BlueCrest Capital Mgmt., and Mike Vranos’s Ellington.

Let’s now review hedge fund activity in other stocks – not necessarily in the same industry as Ultragenyx Pharmaceutical Inc (NASDAQ:RARE) but similarly valued. We will take a look at NorthWestern Corporation (NYSE:NWE), Covetrus, Inc. (NASDAQ:CVET), Macquarie Infrastructure Corporation (NYSE:MIC), and Blueprint Medicines Corporation (NASDAQ:BPMC). All of these stocks’ market caps are closest to RARE’s market cap.

As you can see these stocks had an average of 22.25 hedge funds with bullish positions and the average amount invested in these stocks was $395 million. That figure was $320 million in RARE’s case. Blueprint Medicines Corporation (NASDAQ:BPMC) is the most popular stock in this table. On the other hand NorthWestern Corporation (NYSE:NWE) is the least popular one with only 15 bullish hedge fund positions. Ultragenyx Pharmaceutical Inc (NASDAQ:RARE) is not the least popular stock in this group but hedge fund interest is still below average. This is a slightly negative signal and we’d rather spend our time researching stocks that hedge funds are piling on. Our calculations showed that top 20 most popular stocks among hedge funds returned 1.9% in Q2 through May 30th and outperformed the S&P 500 ETF (SPY) by more than 3 percentage points. Unfortunately RARE wasn’t nearly as popular as these 20 stocks (hedge fund sentiment was quite bearish); RARE investors were disappointed as the stock returned -17.7% during the same time period and underperformed the market. If you are interested in investing in large cap stocks with huge upside potential, you should check out the top 20 most popular stocks among hedge funds as 13 of these stocks already outperformed the market so far in Q2.