Hedge fund managers like David Einhorn, Bill Ackman, or Carl Icahn became billionaires through reaping large profits for their investors, which is why piggybacking their stock picks may provide us with significant returns as well. Many hedge funds, like Paul Singer’s Elliott Management, are pretty secretive, but we can still get some insights by analyzing their quarterly 13F filings. One of the most fertile grounds for large abnormal returns is hedge funds’ most popular small-cap picks, which are not so widely followed and often trade at a discount to their intrinsic value. In this article we will check out hedge fund activity in another small-cap stock: TiVo Corporation (NASDAQ:TIVO).

TiVo Corporation (NASDAQ:TIVO) shares haven’t seen a lot of action during the first quarter. Overall, hedge fund sentiment was unchanged. The stock was in 19 hedge funds’ portfolios at the end of the first quarter of 2019. At the end of this article we will also compare TIVO to other stocks including PBF Logistics LP (NYSE:PBFX), Clarivate Analytics Plc (NYSE:CCC), and Materion Corp (NYSE:MTRN) to get a better sense of its popularity. 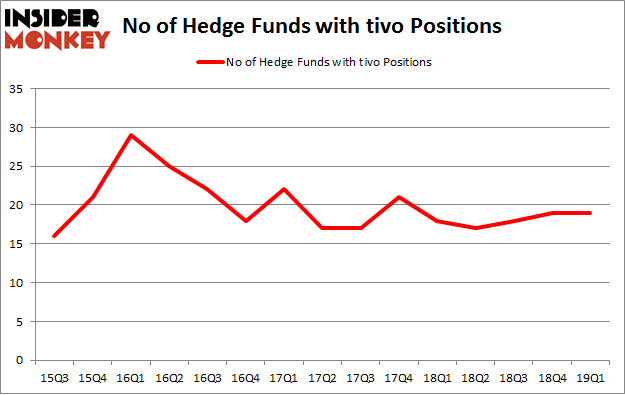 Among these funds, Engaged Capital held the most valuable stake in TiVo Corporation (NASDAQ:TIVO), which was worth $23.5 million at the end of the first quarter. On the second spot was Lynrock Lake which amassed $18.8 million worth of shares. Moreover, Soros Fund Management, Litespeed Management, and GLG Partners were also bullish on TiVo Corporation (NASDAQ:TIVO), allocating a large percentage of their portfolios to this stock.

Seeing as TiVo Corporation (NASDAQ:TIVO) has experienced declining sentiment from hedge fund managers, it’s easy to see that there were a few funds that decided to sell off their positions entirely last quarter. It’s worth mentioning that Ric Dillon’s Diamond Hill Capital sold off the largest investment of all the hedgies tracked by Insider Monkey, valued at an estimated $3.8 million in stock, and Sander Gerber’s Hudson Bay Capital Management was right behind this move, as the fund cut about $3.4 million worth. These transactions are interesting, as aggregate hedge fund interest stayed the same (this is a bearish signal in our experience).

As you can see these stocks had an average of 12.5 hedge funds with bullish positions and the average amount invested in these stocks was $162 million. That figure was $113 million in TIVO’s case. Clarivate Analytics Plc (NYSE:CCC) is the most popular stock in this table. On the other hand PBF Logistics LP (NYSE:PBFX) is the least popular one with only 2 bullish hedge fund positions. TiVo Corporation (NASDAQ:TIVO) is not the most popular stock in this group but hedge fund interest is still above average. This is a slightly positive signal but we’d rather spend our time researching stocks that hedge funds are piling on. Our calculations showed that top 20 most popular stocks among hedge funds returned 1.9% in Q2 through May 30th and outperformed the S&P 500 ETF (SPY) by more than 3 percentage points. Unfortunately TIVO wasn’t nearly as popular as these 20 stocks and hedge funds that were betting on TIVO were disappointed as the stock returned -27.5% during the same period and underperformed the market. If you are interested in investing in large cap stocks with huge upside potential, you should check out the top 20 most popular stocks among hedge funds as 13 of these stocks already outperformed the market so far in Q2.