A market surge in the first quarter, spurred by easing global macroeconomic concerns and Powell’s pivot ended up having a positive impact on the markets and many hedge funds as a result. The stocks of smaller companies which were especially hard hit during the fourth quarter slightly outperformed the market during the first quarter. Unfortunately, Trump is unpredictable and volatility returned in the second quarter and smaller-cap stocks went back to selling off. We finished compiling the latest 13F filings to get an idea about what hedge funds are thinking about the overall market as well as individual stocks. In this article we will study the hedge fund sentiment to see how those concerns affected their ownership of Tech Data Corp (NASDAQ:TECD) during the quarter.

Is Tech Data Corp (NASDAQ:TECD) a buy, sell, or hold? Investors who are in the know are reducing their bets on the stock. The number of long hedge fund bets retreated by 4 lately. Our calculations also showed that tecd isn’t among the 30 most popular stocks among hedge funds.

What does the smart money think about Tech Data Corp (NASDAQ:TECD)?

At Q1’s end, a total of 19 of the hedge funds tracked by Insider Monkey were long this stock, a change of -17% from the previous quarter. By comparison, 18 hedge funds held shares or bullish call options in TECD a year ago. With the smart money’s positions undergoing their usual ebb and flow, there exists a select group of notable hedge fund managers who were adding to their holdings substantially (or already accumulated large positions). 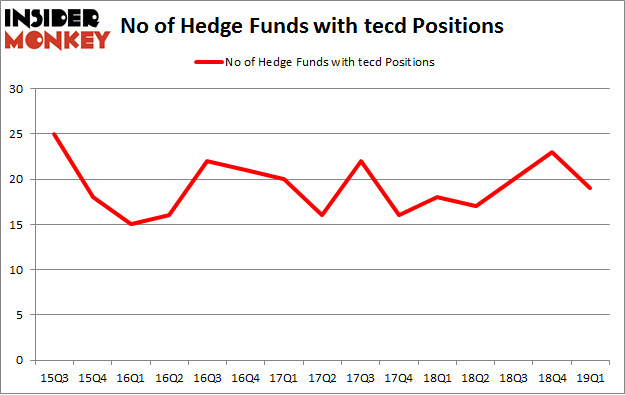 Among these funds, AQR Capital Management held the most valuable stake in Tech Data Corp (NASDAQ:TECD), which was worth $205.1 million at the end of the first quarter. On the second spot was GLG Partners which amassed $35.9 million worth of shares. Moreover, Arrowstreet Capital, Birch Run Capital, and Shellback Capital were also bullish on Tech Data Corp (NASDAQ:TECD), allocating a large percentage of their portfolios to this stock.

Because Tech Data Corp (NASDAQ:TECD) has faced bearish sentiment from the aggregate hedge fund industry, logic holds that there was a specific group of funds who were dropping their positions entirely in the third quarter. It’s worth mentioning that Israel Englander’s Millennium Management sold off the biggest investment of the “upper crust” of funds watched by Insider Monkey, worth close to $11.5 million in stock, and Dmitry Balyasny’s Balyasny Asset Management was right behind this move, as the fund sold off about $1.2 million worth. These bearish behaviors are intriguing to say the least, as total hedge fund interest was cut by 4 funds in the third quarter.

As you can see these stocks had an average of 13.75 hedge funds with bullish positions and the average amount invested in these stocks was $164 million. That figure was $308 million in TECD’s case. BJ’s Wholesale Club Holdings, Inc. (NYSE:BJ) is the most popular stock in this table. On the other hand Vermilion Energy Inc (NYSE:VET) is the least popular one with only 6 bullish hedge fund positions. Tech Data Corp (NASDAQ:TECD) is not the most popular stock in this group but hedge fund interest is still above average. This is a slightly positive signal but we’d rather spend our time researching stocks that hedge funds are piling on. Our calculations showed that top 20 most popular stocks among hedge funds returned 1.9% in Q2 through May 30th and outperformed the S&P 500 ETF (SPY) by more than 3 percentage points. Unfortunately TECD wasn’t nearly as popular as these 20 stocks and hedge funds that were betting on TECD were disappointed as the stock returned -5.2% during the same period and underperformed the market. If you are interested in investing in large cap stocks with huge upside potential, you should check out the top 20 most popular stocks among hedge funds as 13 of these stocks already outperformed the market so far in Q2.