How do you pick the next stock to invest in? One way would be to spend hours of research browsing through thousands of publicly traded companies. However, an easier way is to look at the stocks that smart money investors are collectively bullish on. Hedge funds and other institutional investors usually invest large amounts of capital and have to conduct due diligence while choosing their next pick. They don’t always get it right, but, on average, their stock picks historically generated strong returns after adjusting for known risk factors. With this in mind, let’s take a look at the recent hedge fund activity surrounding Sirius XM Holdings Inc (NASDAQ:SIRI).

Is Sirius XM Holdings Inc (NASDAQ:SIRI) the right pick for your portfolio? The smart money is getting more bullish. The number of long hedge fund positions improved by 11 lately. Our calculations also showed that SIRI isn’t among the 30 most popular stocks among hedge funds. SIRI was in 32 hedge funds’ portfolios at the end of March. There were 21 hedge funds in our database with SIRI holdings at the end of the previous quarter.

If you’d ask most stock holders, hedge funds are assumed to be worthless, old investment vehicles of years past. While there are greater than 8000 funds in operation at the moment, Our experts choose to focus on the elite of this club, around 750 funds. Most estimates calculate that this group of people manage the lion’s share of the smart money’s total capital, and by watching their best investments, Insider Monkey has come up with many investment strategies that have historically outrun the S&P 500 index. Insider Monkey’s flagship hedge fund strategy exceeded the S&P 500 index by around 5 percentage points a year since its inception in May 2014 through the end of May. We were able to generate large returns even by identifying short candidates. Our portfolio of short stocks lost 30.9% since February 2017 (through May 30th) even though the market was up nearly 24% during the same period. We just shared a list of 5 short targets in our latest quarterly update and they are already down an average of 11.9% in less than a couple of weeks whereas our long picks outperformed the market by 2 percentage points in this volatile 2 week period.

At Q1’s end, a total of 32 of the hedge funds tracked by Insider Monkey held long positions in this stock, a change of 52% from the previous quarter. The graph below displays the number of hedge funds with bullish position in SIRI over the last 15 quarters. With hedge funds’ capital changing hands, there exists a select group of notable hedge fund managers who were adding to their stakes substantially (or already accumulated large positions). 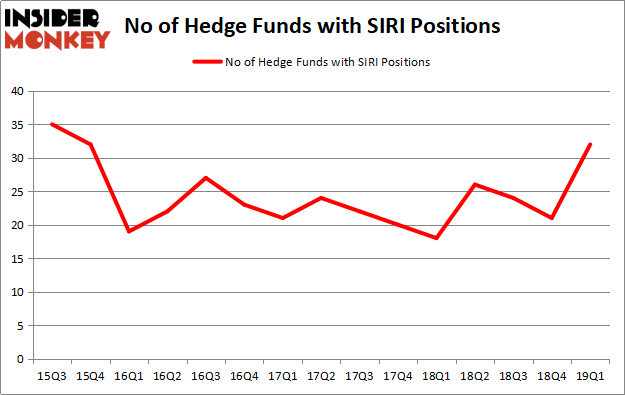 According to Insider Monkey’s hedge fund database, Berkshire Hathaway, managed by Warren Buffett, holds the number one position in Sirius XM Holdings Inc (NASDAQ:SIRI). Berkshire Hathaway has a $782 million position in the stock, comprising 0.4% of its 13F portfolio. On Berkshire Hathaway’s heels is Stuart J. Zimmer of Zimmer Partners, with a $251.7 million position; the fund has 3% of its 13F portfolio invested in the stock. Some other professional money managers that hold long positions consist of Peter Rathjens, Bruce Clarke and John Campbell’s Arrowstreet Capital, Jim Simons’s Renaissance Technologies and Josh Resnick’s Jericho Capital Asset Management.

As you can see these stocks had an average of 38.75 hedge funds with bullish positions and the average amount invested in these stocks was $1325 million. That figure was $1586 million in SIRI’s case. Lyft, Inc. (NASDAQ:LYFT) is the most popular stock in this table. On the other hand SunTrust Banks, Inc. (NYSE:STI) is the least popular one with only 22 bullish hedge fund positions. Sirius XM Holdings Inc (NASDAQ:SIRI) is not the least popular stock in this group but hedge fund interest is still below average. This is a slightly negative signal and we’d rather spend our time researching stocks that hedge funds are piling on. Our calculations showed that top 20 most popular stocks among hedge funds returned 1.9% in Q2 through May 30th and outperformed the S&P 500 ETF (SPY) by more than 3 percentage points. Unfortunately SIRI wasn’t nearly as popular as these 20 stocks (hedge fund sentiment was quite bearish); SIRI investors were disappointed as the stock returned -5.1% during the same time period and underperformed the market. If you are interested in investing in large cap stocks with huge upside potential, you should check out the top 20 most popular stocks among hedge funds as 13 of these stocks already outperformed the market so far in Q2.