Insider Monkey has processed numerous 13F filings of hedge funds and successful investors to create an extensive database of hedge fund holdings. The 13F filings show the hedge funds’ and successful investors’ positions as of the end of the first quarter. You can find write-ups about an individual hedge fund’s trades on numerous financial news websites. However, in this article we will take a look at their collective moves and analyze what the smart money thinks of Sientra Inc (NASDAQ:SIEN) based on that data.

Hedge fund interest in Sientra Inc (NASDAQ:SIEN) shares was flat at the end of last quarter. This is usually a negative indicator. At the end of this article we will also compare SIEN to other stocks including Tocagen Inc. (NASDAQ:TOCA), Celyad SA (EBR:CYAD), and Purple Innovation, Inc. (NASDAQ:PRPL) to get a better sense of its popularity.

What have hedge funds been doing with Sientra Inc (NASDAQ:SIEN)? 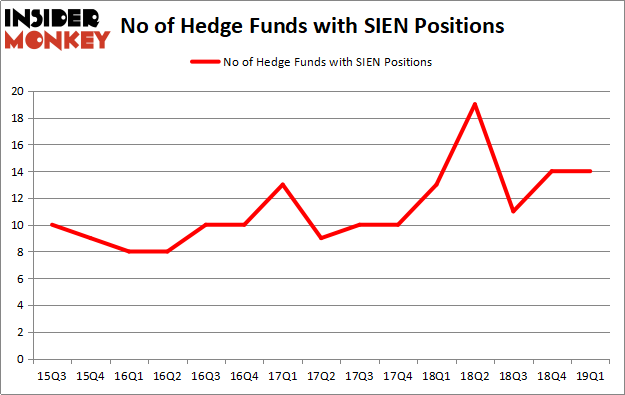 The largest stake in Sientra Inc (NASDAQ:SIEN) was held by Deerfield Management, which reported holding $23.4 million worth of stock at the end of March. It was followed by Millennium Management with a $13.7 million position. Other investors bullish on the company included Granite Point Capital, Pura Vida Investments, and Two Sigma Advisors.

Since Sientra Inc (NASDAQ:SIEN) has experienced falling interest from the entirety of the hedge funds we track, it’s easy to see that there were a few funds that slashed their positions entirely in the third quarter. Interestingly, Brian Ashford-Russell and Tim Woolley’s Polar Capital cut the largest stake of all the hedgies monitored by Insider Monkey, worth close to $11.5 million in stock, and Richard Driehaus’s Driehaus Capital was right behind this move, as the fund dumped about $10.2 million worth. These moves are interesting, as aggregate hedge fund interest stayed the same (this is a bearish signal in our experience).