At Insider Monkey, we pore over the filings of nearly 750 top investment firms every quarter, a process we have now completed for the latest reporting period. The data we’ve gathered as a result gives us access to a wealth of collective knowledge based on these firms’ portfolio holdings as of March 31. In this article, we will use that wealth of knowledge to determine whether or not SemGroup Corp (NYSE:SEMG) makes for a good investment right now.

SemGroup Corp (NYSE:SEMG) has seen an increase in enthusiasm from smart money lately. Our calculations also showed that SEMG isn’t among the 30 most popular stocks among hedge funds.

In the 21st century investor’s toolkit there are a lot of indicators shareholders use to grade publicly traded companies. A couple of the most innovative indicators are hedge fund and insider trading interest. Our researchers have shown that, historically, those who follow the top picks of the elite fund managers can outpace the S&P 500 by a superb amount (see the details here).

At the end of the first quarter, a total of 13 of the hedge funds tracked by Insider Monkey were bullish on this stock, a change of 8% from one quarter earlier. On the other hand, there were a total of 6 hedge funds with a bullish position in SEMG a year ago. With the smart money’s sentiment swirling, there exists a few noteworthy hedge fund managers who were increasing their stakes substantially (or already accumulated large positions). 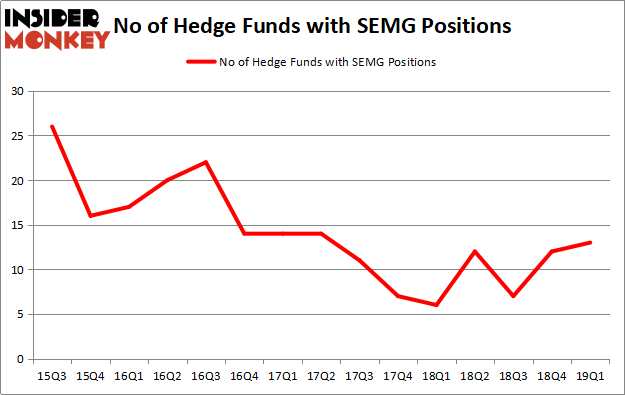 Among these funds, Citadel Investment Group held the most valuable stake in SemGroup Corp (NYSE:SEMG), which was worth $17 million at the end of the first quarter. On the second spot was Renaissance Technologies which amassed $8.9 million worth of shares. Moreover, PAR Capital Management, Millennium Management, and Highland Capital Management were also bullish on SemGroup Corp (NYSE:SEMG), allocating a large percentage of their portfolios to this stock.

With a general bullishness amongst the heavyweights, key money managers have jumped into SemGroup Corp (NYSE:SEMG) headfirst. D E Shaw, managed by D. E. Shaw, created the most outsized position in SemGroup Corp (NYSE:SEMG). D E Shaw had $2.4 million invested in the company at the end of the quarter. Matthew Hulsizer’s PEAK6 Capital Management also initiated a $0.2 million position during the quarter. The other funds with brand new SEMG positions are Andrew Weiss’s Weiss Asset Management and Jeffrey Talpins’s Element Capital Management.

As you can see these stocks had an average of 10.75 hedge funds with bullish positions and the average amount invested in these stocks was $119 million. That figure was $47 million in SEMG’s case. TiVo Corporation (NASDAQ:TIVO) is the most popular stock in this table. On the other hand PBF Logistics LP (NYSE:PBFX) is the least popular one with only 2 bullish hedge fund positions. SemGroup Corp (NYSE:SEMG) is not the most popular stock in this group but hedge fund interest is still above average. This is a slightly positive signal but we’d rather spend our time researching stocks that hedge funds are piling on. Our calculations showed that top 20 most popular stocks among hedge funds returned 6.2% in Q2 through June 19th and outperformed the S&P 500 ETF (SPY) by nearly 3 percentage points. Unfortunately SEMG wasn’t nearly as popular as these 20 stocks and hedge funds that were betting on SEMG were disappointed as the stock returned -15.8% during the same period and underperformed the market. If you are interested in investing in large cap stocks with huge upside potential, you should check out the top 20 most popular stocks among hedge funds as 13 of these stocks already outperformed the market so far in Q2.