How do we determine whether Ryerson Holding Corporation (NYSE:RYI) makes for a good investment at the moment? We analyze the sentiment of a select group of the very best investors in the world, who spend immense amounts of time and resources studying companies. They may not always be right (no one is), but data shows that their consensus long positions have historically outperformed the market when we adjust for known risk factors.

Ryerson Holding Corporation (NYSE:RYI) was in 11 hedge funds’ portfolios at the end of the first quarter of 2019. RYI shareholders have witnessed an increase in support from the world’s most elite money managers of late. There were 8 hedge funds in our database with RYI holdings at the end of the previous quarter. Our calculations also showed that RYI isn’t among the 30 most popular stocks among hedge funds.

If you’d ask most market participants, hedge funds are perceived as unimportant, outdated investment vehicles of yesteryear. While there are over 8000 funds trading at present, Our researchers choose to focus on the masters of this club, about 750 funds. It is estimated that this group of investors oversee bulk of the hedge fund industry’s total capital, and by observing their highest performing equity investments, Insider Monkey has identified various investment strategies that have historically surpassed the market. Insider Monkey’s flagship hedge fund strategy outstripped the S&P 500 index by around 5 percentage points annually since its inception in May 2014 through June 18th. We were able to generate large returns even by identifying short candidates. Our portfolio of short stocks lost 28.2% since February 2017 (through June 18th) even though the market was up nearly 30% during the same period. We just shared a list of 5 short targets in our latest quarterly update and they are already down an average of 8.2% in a month whereas our long picks outperformed the market by 2.5 percentage points in this volatile 5 week period (our long picks also beat the market by 15 percentage points so far this year). 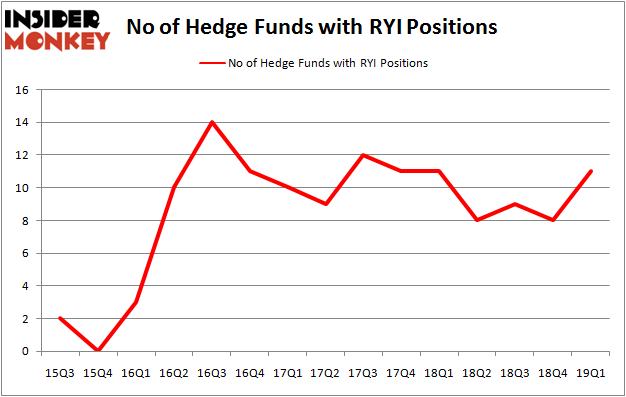 With a general bullishness amongst the heavyweights, some big names have been driving this bullishness. Winton Capital Management, managed by David Harding, initiated the most outsized position in Ryerson Holding Corporation (NYSE:RYI). Winton Capital Management had $0.7 million invested in the company at the end of the quarter. Israel Englander’s Millennium Management also initiated a $0.6 million position during the quarter. The other funds with new positions in the stock are Thomas Bailard’s Bailard Inc, Bruce Kovner’s Caxton Associates LP, and Gavin Saitowitz and Cisco J. del Valle’s Springbok Capital.

As you can see these stocks had an average of 11 hedge funds with bullish positions and the average amount invested in these stocks was $58 million. That figure was $16 million in RYI’s case. Aquantia Corp. (NYSE:AQ) is the most popular stock in this table. On the other hand Consolidated-Tomoka Land Co. (NYSE:CTO) is the least popular one with only 8 bullish hedge fund positions. Ryerson Holding Corporation (NYSE:RYI) is not the least popular stock in this group but hedge fund interest is still below average. This is a slightly negative signal and we’d rather spend our time researching stocks that hedge funds are piling on. Our calculations showed that top 20 most popular stocks among hedge funds returned 6.2% in Q2 through June 19th and outperformed the S&P 500 ETF (SPY) by nearly 3 percentage points. Unfortunately RYI wasn’t nearly as popular as these 20 stocks (hedge fund sentiment was quite bearish); RYI investors were disappointed as the stock returned -10.7% during the same time period and underperformed the market. If you are interested in investing in large cap stocks with huge upside potential, you should check out the top 20 most popular stocks among hedge funds as 13 of these stocks already outperformed the market so far in Q2.

Is J.C. Penney Company, Inc. (JCP) A Good Stock To Buy?
Monthly Newsletter Strategy
Download a free copy of our newsletter and see the details inside!
Hedge Fund Resource Center
Related News
Here’s What Smart Money Thinks of Ryerson Holding Corp (RYI) Why Valeant, Progenics, Ryerson, Zafgen and TerraForm Are On The Move Today What’s the Deal With These Five Stocks Trading in Red on Tuesday? 25 Biggest Activist Short Sellers in the Hedge Fund World 21 Best Tinder Bio Examples for Newly Single Moms 17 Best Excuses to Get Out of Work
Billionaire Hedge Funds