Is ResMed Inc. (NYSE:RMD) a good equity to bet on right now? We like to check what the smart money thinks first before doing extensive research. Although there have been several high profile failed hedge fund picks, the consensus picks among hedge fund investors have historically outperformed the market after adjusting for known risk attributes. It’s not surprising given that hedge funds have access to better information and more resources to predict the winners in the stock market.

Is ResMed Inc. (NYSE:RMD) ready to rally soon? The best stock pickers are getting less bullish. The number of bullish hedge fund positions were cut by 4 in recent months. Our calculations also showed that rmd isn’t among the 30 most popular stocks among hedge funds.

In the financial world there are tons of methods stock market investors have at their disposal to appraise publicly traded companies. Some of the most useful methods are hedge fund and insider trading interest. We have shown that, historically, those who follow the top picks of the top money managers can beat the broader indices by a superb amount (see the details here). 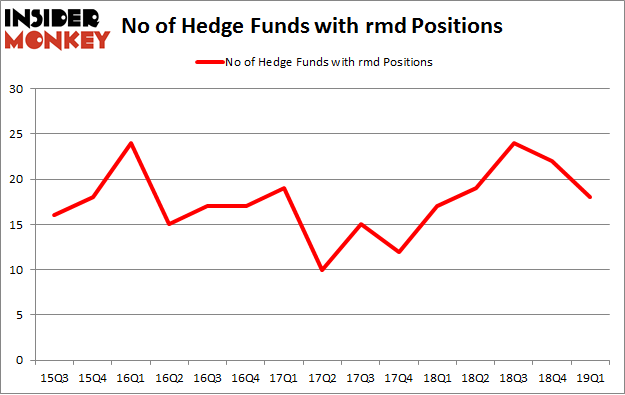 Since ResMed Inc. (NYSE:RMD) has experienced bearish sentiment from the smart money, it’s safe to say that there was a specific group of hedge funds that elected to cut their entire stakes by the end of the third quarter. At the top of the heap, Israel Englander’s Millennium Management dropped the biggest stake of all the hedgies tracked by Insider Monkey, worth an estimated $38.8 million in stock, and Jim Simons’s Renaissance Technologies was right behind this move, as the fund dumped about $37.9 million worth. These transactions are intriguing to say the least, as aggregate hedge fund interest dropped by 4 funds by the end of the third quarter.

As you can see these stocks had an average of 33 hedge funds with bullish positions and the average amount invested in these stocks was $1629 million. That figure was $147 million in RMD’s case. Altice USA, Inc. (NYSE:ATUS) is the most popular stock in this table. On the other hand Evergy, Inc. (NYSE:EVRG) is the least popular one with only 24 bullish hedge fund positions. Compared to these stocks ResMed Inc. (NYSE:RMD) is even less popular than EVRG. Hedge funds clearly dropped the ball on RMD as the stock delivered strong returns, though hedge funds’ consensus picks still generated respectable returns. Our calculations showed that top 20 most popular stocks among hedge funds returned 1.9% in Q2 through May 30th and outperformed the S&P 500 ETF (SPY) by more than 3 percentage points. A small number of hedge funds were also right about betting on RMD as the stock returned 9.3% during the same period and outperformed the market by an even larger margin.