Is Qualys Inc (NASDAQ:QLYS) ready to rally soon? Prominent investors are selling. The number of bullish hedge fund bets decreased by 3 lately. Our calculations also showed that QLYS isn’t among the 30 most popular stocks among hedge funds. QLYS was in 14 hedge funds’ portfolios at the end of the first quarter of 2019. There were 17 hedge funds in our database with QLYS positions at the end of the previous quarter.

At the end of the first quarter, a total of 14 of the hedge funds tracked by Insider Monkey were bullish on this stock, a change of -18% from the previous quarter. The graph below displays the number of hedge funds with bullish position in QLYS over the last 15 quarters. With hedge funds’ positions undergoing their usual ebb and flow, there exists a few key hedge fund managers who were upping their stakes substantially (or already accumulated large positions). 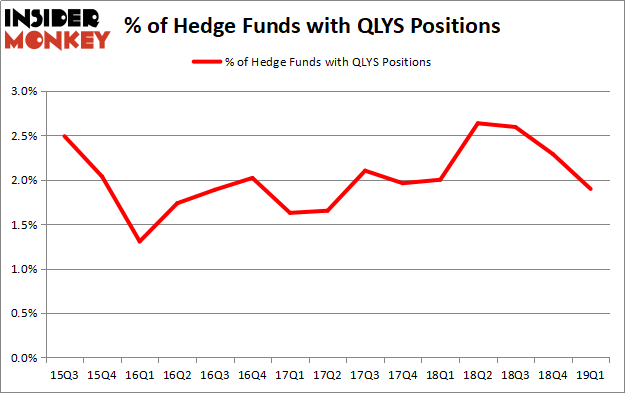 More specifically, Renaissance Technologies was the largest shareholder of Qualys Inc (NASDAQ:QLYS), with a stake worth $52 million reported as of the end of March. Trailing Renaissance Technologies was Alkeon Capital Management, which amassed a stake valued at $41.7 million. AQR Capital Management, Gotham Asset Management, and Two Sigma Advisors were also very fond of the stock, giving the stock large weights in their portfolios.

Because Qualys Inc (NASDAQ:QLYS) has experienced declining sentiment from the entirety of the hedge funds we track, it’s easy to see that there exists a select few hedge funds who were dropping their full holdings in the third quarter. It’s worth mentioning that Dmitry Balyasny’s Balyasny Asset Management dropped the biggest stake of the “upper crust” of funds monitored by Insider Monkey, valued at about $0.9 million in stock, and George McCabe’s Portolan Capital Management was right behind this move, as the fund said goodbye to about $0.7 million worth. These transactions are important to note, as total hedge fund interest dropped by 3 funds in the third quarter.

As you can see these stocks had an average of 23 hedge funds with bullish positions and the average amount invested in these stocks was $257 million. That figure was $145 million in QLYS’s case. Green Dot Corporation (NYSE:GDOT) is the most popular stock in this table. On the other hand Wolverine World Wide, Inc. (NYSE:WWW) is the least popular one with only 19 bullish hedge fund positions. Compared to these stocks Qualys Inc (NASDAQ:QLYS) is even less popular than WWW. Hedge funds clearly dropped the ball on QLYS as the stock delivered strong returns, though hedge funds’ consensus picks still generated respectable returns. Our calculations showed that top 20 most popular stocks among hedge funds returned 6.2% in Q2 through June 19th and outperformed the S&P 500 ETF (SPY) by nearly 3 percentage points. A small number of hedge funds were also right about betting on QLYS as the stock returned 7.5% during the same period and outperformed the market by an even larger margin.