Is QCR Holdings, Inc. (NASDAQ:QCRH) undervalued? The best stock pickers are in an optimistic mood. The number of bullish hedge fund bets improved by 1 in recent months. Our calculations also showed that QCRH isn’t among the 30 most popular stocks among hedge funds.

According to most shareholders, hedge funds are perceived as unimportant, outdated investment vehicles of yesteryear. While there are over 8000 funds with their doors open at present, We hone in on the crème de la crème of this group, about 750 funds. It is estimated that this group of investors administer bulk of the hedge fund industry’s total capital, and by watching their inimitable stock picks, Insider Monkey has unsheathed many investment strategies that have historically exceeded the market. Insider Monkey’s flagship hedge fund strategy outperformed the S&P 500 index by around 5 percentage points per year since its inception in May 2014 through June 18th. We were able to generate large returns even by identifying short candidates. Our portfolio of short stocks lost 28.2% since February 2017 (through June 18th) even though the market was up nearly 30% during the same period. We just shared a list of 5 short targets in our latest quarterly update and they are already down an average of 8.2% in a month whereas our long picks outperformed the market by 2.5 percentage points in this volatile 5 week period (our long picks also beat the market by 15 percentage points so far this year). 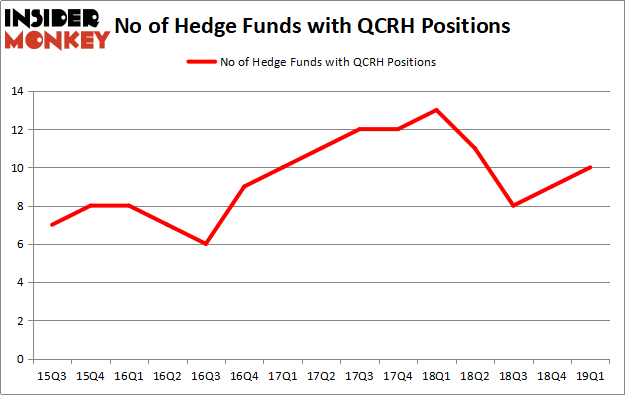 Of the funds tracked by Insider Monkey, Jim Simons’s Renaissance Technologies has the number one position in QCR Holdings, Inc. (NASDAQ:QCRH), worth close to $18.5 million, accounting for less than 0.1%% of its total 13F portfolio. Coming in second is Endicott Management, led by Robert I. Usdan and Wayne K. Goldstein, holding a $14.6 million position; the fund has 14.3% of its 13F portfolio invested in the stock. Other members of the smart money that hold long positions include Paul Magidson, Jonathan Cohen. And Ostrom Enders’s Castine Capital Management, Fred Cummings’s Elizabeth Park Capital Management and Israel Englander’s Millennium Management.

As industrywide interest jumped, key hedge funds were leading the bulls’ herd. EJF Capital, managed by Emanuel J. Friedman, assembled the biggest position in QCR Holdings, Inc. (NASDAQ:QCRH). EJF Capital had $0.3 million invested in the company at the end of the quarter. Roger Ibbotson’s Zebra Capital Management also made a $0.2 million investment in the stock during the quarter.

As you can see these stocks had an average of 13 hedge funds with bullish positions and the average amount invested in these stocks was $75 million. That figure was $58 million in QCRH’s case. A10 Networks Inc (NYSE:ATEN) is the most popular stock in this table. On the other hand AVROBIO, Inc. (NASDAQ:AVRO) is the least popular one with only 4 bullish hedge fund positions. QCR Holdings, Inc. (NASDAQ:QCRH) is not the least popular stock in this group but hedge fund interest is still below average. This is a slightly negative signal and we’d rather spend our time researching stocks that hedge funds are piling on. Our calculations showed that top 20 most popular stocks among hedge funds returned 6.2% in Q2 through June 19th and outperformed the S&P 500 ETF (SPY) by nearly 3 percentage points. Unfortunately QCRH wasn’t nearly as popular as these 20 stocks (hedge fund sentiment was quite bearish); QCRH investors were disappointed as the stock returned 1.4% during the same time period and underperformed the market. If you are interested in investing in large cap stocks with huge upside potential, you should check out the top 20 most popular stocks among hedge funds as 13 of these stocks already outperformed the market so far in Q2.