QAD Inc. (NASDAQ:QADA) has seen a decrease in activity from the world’s largest hedge funds of late. QADA was in 16 hedge funds’ portfolios at the end of March. There were 17 hedge funds in our database with QADA positions at the end of the previous quarter. Our calculations also showed that qada isn’t among the 30 most popular stocks among hedge funds.

What does smart money think about QAD Inc. (NASDAQ:QADA)?

At Q1’s end, a total of 16 of the hedge funds tracked by Insider Monkey were long this stock, a change of -6% from one quarter earlier. The graph below displays the number of hedge funds with bullish position in QADA over the last 15 quarters. With the smart money’s sentiment swirling, there exists a few noteworthy hedge fund managers who were boosting their stakes significantly (or already accumulated large positions). 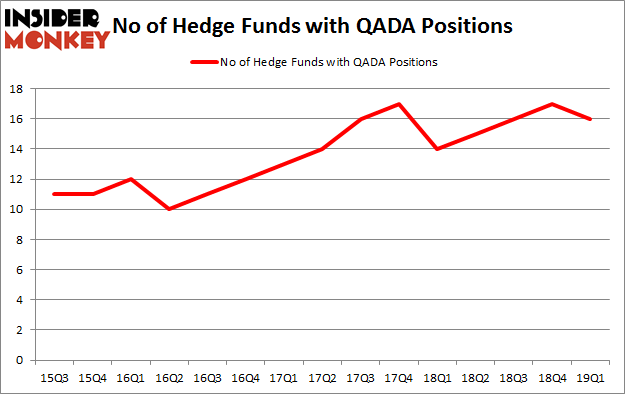 According to publicly available hedge fund and institutional investor holdings data compiled by Insider Monkey, Wilmot B. Harkey and Daniel Mack’s Nantahala Capital Management has the biggest position in QAD Inc. (NASDAQ:QADA), worth close to $45.7 million, amounting to 1.4% of its total 13F portfolio. Coming in second is Renaissance Technologies, managed by Jim Simons, which holds a $28.5 million position; the fund has less than 0.1%% of its 13F portfolio invested in the stock. Remaining professional money managers that hold long positions consist of George McCabe’s Portolan Capital Management, David Atterbury’s Whetstone Capital Advisors and Chuck Royce’s Royce & Associates.

We view hedge fund activity in the stock unfavorable, but in this case there was only a single hedge fund selling its entire position: Shannon River Fund Management. One hedge fund selling its entire position doesn’t always imply a bearish intent. Theoretically a hedge fund may decide to sell a promising position in order to invest the proceeds in a more promising idea. However, we don’t think this is the case in this case because none of the 700+ hedge funds tracked by Insider Monkey identified QADA as a viable investment and initiated a position in the stock.

As you can see these stocks had an average of 9.25 hedge funds with bullish positions and the average amount invested in these stocks was $35 million. That figure was $125 million in QADA’s case. Encore Capital Group, Inc. (NASDAQ:ECPG) is the most popular stock in this table. On the other hand Jianpu Technology Inc. (NYSE:JT) is the least popular one with only 7 bullish hedge fund positions. Compared to these stocks QAD Inc. (NASDAQ:QADA) is more popular among hedge funds. Our calculations showed that top 20 most popular stocks among hedge funds returned 6.2% in Q2 through June 19th and outperformed the S&P 500 ETF (SPY) by nearly 3 percentage points. Unfortunately QADA wasn’t nearly as popular as these 20 stocks and hedge funds that were betting on QADA were disappointed as the stock returned -3.6% during the same period and underperformed the market. If you are interested in investing in large cap stocks with huge upside potential, you should check out the top 20 most popular stocks among hedge funds as 13 of these stocks already outperformed the market in Q2.