Before we spend days researching a stock idea we like to take a look at how hedge funds and billionaire investors recently traded that stock. The S&P 500 Index ETF (SPY) lost 2.6% in the first two months of the second quarter. Ten out of 11 industry groups in the S&P 500 Index lost value in May. The average return of a randomly picked stock in the index was even worse (-3.6%). This means you (or a monkey throwing a dart) have less than an even chance of beating the market by randomly picking a stock. On the other hand, the top 20 most popular S&P 500 stocks among hedge funds not only generated positive returns but also outperformed the index by about 3 percentage points through May 30th. In this article, we will take a look at what hedge funds think about Preferred Bank (NASDAQ:PFBC).

Preferred Bank (NASDAQ:PFBC) shares haven’t seen a lot of action during the first quarter. Overall, hedge fund sentiment was unchanged. The stock was in 11 hedge funds’ portfolios at the end of the first quarter of 2019. The level and the change in hedge fund popularity aren’t the only variables you need to analyze to decipher hedge funds’ perspectives. A stock may witness a boost in popularity but it may still be less popular than similarly priced stocks. That’s why at the end of this article we will examine companies such as OraSure Technologies, Inc. (NASDAQ:OSUR), Oasis Midstream Partners LP (NYSE:OMP), and Cass Information Systems, Inc. (NASDAQ:CASS) to gather more data points.

To the average investor there are plenty of gauges stock traders use to size up publicly traded companies. A duo of the less utilized gauges are hedge fund and insider trading activity. We have shown that, historically, those who follow the top picks of the elite investment managers can outpace the broader indices by a solid amount (see the details here).

How have hedgies been trading Preferred Bank (NASDAQ:PFBC)?

Heading into the second quarter of 2019, a total of 11 of the hedge funds tracked by Insider Monkey were long this stock, a change of 0% from the previous quarter. Below, you can check out the change in hedge fund sentiment towards PFBC over the last 15 quarters. So, let’s review which hedge funds were among the top holders of the stock and which hedge funds were making big moves. 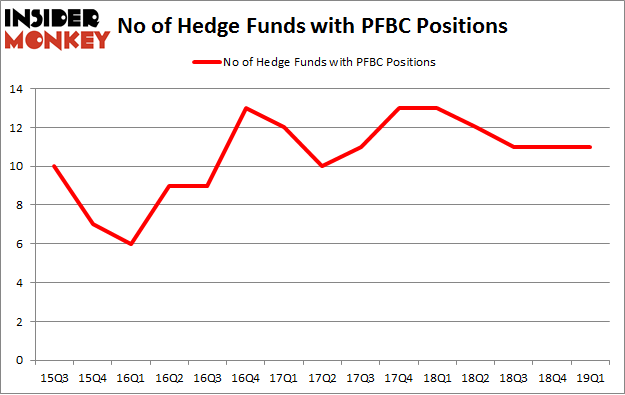 Of the funds tracked by Insider Monkey, Jim Simons’s Renaissance Technologies has the most valuable position in Preferred Bank (NASDAQ:PFBC), worth close to $16.9 million, corresponding to less than 0.1%% of its total 13F portfolio. Sitting at the No. 2 spot is Matthew Lindenbaum of Basswood Capital, with a $7.5 million position; the fund has 0.5% of its 13F portfolio invested in the stock. Some other peers that are bullish include Paul Marshall and Ian Wace’s Marshall Wace LLP, Israel Englander’s Millennium Management and Ken Griffin’s Citadel Investment Group.

Due to the fact that Preferred Bank (NASDAQ:PFBC) has experienced a decline in interest from hedge fund managers, logic holds that there was a specific group of hedge funds who were dropping their positions entirely in the third quarter. At the top of the heap, Andrew Feldstein and Stephen Siderow’s Blue Mountain Capital dropped the largest position of the 700 funds monitored by Insider Monkey, totaling about $0.5 million in stock, and Richard Driehaus’s Driehaus Capital was right behind this move, as the fund said goodbye to about $0.3 million worth. These bearish behaviors are important to note, as total hedge fund interest stayed the same (this is a bearish signal in our experience).

As you can see these stocks had an average of 10.25 hedge funds with bullish positions and the average amount invested in these stocks was $38 million. That figure was $41 million in PFBC’s case. OraSure Technologies, Inc. (NASDAQ:OSUR) is the most popular stock in this table. On the other hand Oasis Midstream Partners LP (NYSE:OMP) is the least popular one with only 3 bullish hedge fund positions. Preferred Bank (NASDAQ:PFBC) is not the most popular stock in this group but hedge fund interest is still above average. This is a slightly positive signal but we’d rather spend our time researching stocks that hedge funds are piling on. Our calculations showed that top 20 most popular stocks among hedge funds returned 6.2% in Q2 through June 19th and outperformed the S&P 500 ETF (SPY) by nearly 3 percentage points. Unfortunately PFBC wasn’t nearly as popular as these 20 stocks and hedge funds that were betting on PFBC were disappointed as the stock returned 3.3% during the same period and underperformed the market. If you are interested in investing in large cap stocks with huge upside potential, you should check out the top 20 most popular stocks among hedge funds as 13 of these stocks already outperformed the market so far in Q2.