Parsley Energy Inc (NYSE:PE) investors should pay attention to a decrease in activity from the world’s largest hedge funds recently. Our calculations also showed that PE isn’t among the 30 most popular stocks among hedge funds.

At the end of the first quarter, a total of 34 of the hedge funds tracked by Insider Monkey were bullish on this stock, a change of -6% from one quarter earlier. By comparison, 35 hedge funds held shares or bullish call options in PE a year ago. With hedge funds’ positions undergoing their usual ebb and flow, there exists a select group of noteworthy hedge fund managers who were increasing their holdings meaningfully (or already accumulated large positions). 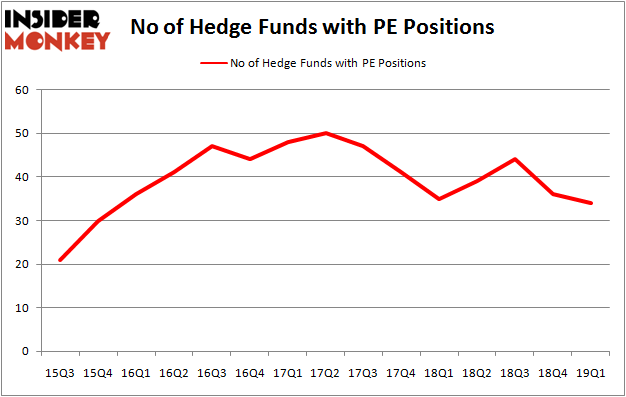 When looking at the institutional investors followed by Insider Monkey, Adage Capital Management, managed by Phill Gross and Robert Atchinson, holds the biggest position in Parsley Energy Inc (NYSE:PE). Adage Capital Management has a $198.6 million position in the stock, comprising 0.5% of its 13F portfolio. Sitting at the No. 2 spot is Israel Englander of Millennium Management, with a $196.4 million position; 0.3% of its 13F portfolio is allocated to the company. Remaining peers with similar optimism contain Jonathan Barrett and Paul Segal’s Luminus Management, Stuart J. Zimmer’s Zimmer Partners and Jim Simons’s Renaissance Technologies.

Because Parsley Energy Inc (NYSE:PE) has witnessed falling interest from the aggregate hedge fund industry, logic holds that there exists a select few fund managers that elected to cut their full holdings heading into Q3. It’s worth mentioning that Jonathan Barrett and Paul Segal’s Luminus Management said goodbye to the largest investment of the “upper crust” of funds watched by Insider Monkey, valued at an estimated $16 million in stock, and Till Bechtolsheimer’s Arosa Capital Management was right behind this move, as the fund cut about $13.5 million worth. These moves are important to note, as total hedge fund interest dropped by 2 funds heading into Q3.

As you can see these stocks had an average of 21 hedge funds with bullish positions and the average amount invested in these stocks was $779 million. That figure was $850 million in PE’s case. Helmerich & Payne, Inc. (NYSE:HP) is the most popular stock in this table. On the other hand Cronos Group Inc. (NASDAQ:CRON) is the least popular one with only 7 bullish hedge fund positions. Compared to these stocks Parsley Energy Inc (NYSE:PE) is more popular among hedge funds. Our calculations showed that top 20 most popular stocks among hedge funds returned 1.9% in Q2 through May 30th and outperformed the S&P 500 ETF (SPY) by more than 3 percentage points. Unfortunately PE wasn’t nearly as popular as these 20 stocks and hedge funds that were betting on PE were disappointed as the stock returned -5.8% during the same period and underperformed the market. If you are interested in investing in large cap stocks with huge upside potential, you should check out the top 20 most popular stocks among hedge funds as 13 of these stocks already outperformed the market in Q2.