There are several ways to beat the market, and investing in small cap stocks has historically been one of them. We like to improve the odds of beating the market further by examining what famous hedge fund operators such as Jeff Ubben, George Soros and Carl Icahn think. Those hedge fund operators make billions of dollars each year by hiring the best and the brightest to do research on stocks, including small cap stocks that big brokerage houses simply don’t cover. Because of Carl Icahn and other elite funds’ exemplary historical records, we pay attention to their small cap picks. In this article, we use hedge fund filing data to analyze Owens & Minor, Inc. (NYSE:OMI).

Owens & Minor, Inc. (NYSE:OMI) shares haven’t seen a lot of action during the first quarter. Overall, hedge fund sentiment was unchanged. The stock was in 15 hedge funds’ portfolios at the end of the first quarter of 2019. At the end of this article we will also compare OMI to other stocks including Evelo Biosciences, Inc. (NASDAQ:EVLO), Cross Country Healthcare, Inc. (NASDAQ:CCRN), and Aerohive Networks Inc (NYSE:HIVE) to get a better sense of its popularity. 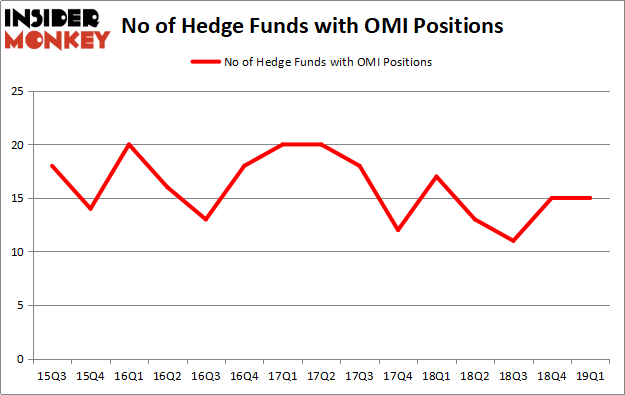 Of the funds tracked by Insider Monkey, Chuck Royce’s Royce & Associates has the biggest position in Owens & Minor, Inc. (NYSE:OMI), worth close to $5.6 million, corresponding to less than 0.1%% of its total 13F portfolio. The second most bullish fund manager is Citadel Investment Group, led by Ken Griffin, holding a $3.8 million position; the fund has less than 0.1%% of its 13F portfolio invested in the stock. Some other hedge funds and institutional investors with similar optimism consist of Israel Englander’s Millennium Management, John Overdeck and David Siegel’s Two Sigma Advisors and Jim Simons’s Renaissance Technologies.

Seeing as Owens & Minor, Inc. (NYSE:OMI) has experienced falling interest from the aggregate hedge fund industry, we can see that there were a few hedgies who were dropping their positions entirely heading into Q3. It’s worth mentioning that Phil Frohlich’s Prescott Group Capital Management sold off the largest stake of the 700 funds followed by Insider Monkey, worth about $3.5 million in stock, and Michael Platt and William Reeves’s BlueCrest Capital Mgmt. was right behind this move, as the fund cut about $0.1 million worth. These transactions are interesting, as total hedge fund interest stayed the same (this is a bearish signal in our experience).