Is Ollie’s Bargain Outlet Holdings Inc (NASDAQ:OLLI) a bargain? Prominent investors are taking a pessimistic view. The number of bullish hedge fund bets decreased by 2 recently. Our calculations also showed that OLLI isn’t among the 30 most popular stocks among hedge funds. OLLI was in 22 hedge funds’ portfolios at the end of the first quarter of 2019. There were 24 hedge funds in our database with OLLI holdings at the end of the previous quarter.

Heading into the second quarter of 2019, a total of 22 of the hedge funds tracked by Insider Monkey held long positions in this stock, a change of -8% from one quarter earlier. On the other hand, there were a total of 12 hedge funds with a bullish position in OLLI a year ago. With hedgies’ positions undergoing their usual ebb and flow, there exists a select group of noteworthy hedge fund managers who were adding to their holdings considerably (or already accumulated large positions). 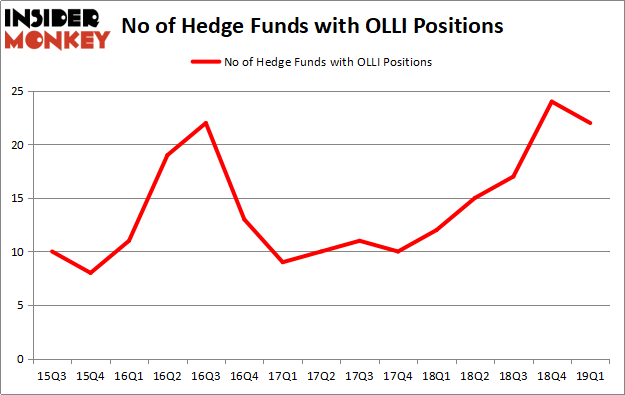 More specifically, Marshall Wace LLP was the largest shareholder of Ollie’s Bargain Outlet Holdings Inc (NASDAQ:OLLI), with a stake worth $48.7 million reported as of the end of March. Trailing Marshall Wace LLP was Junto Capital Management, which amassed a stake valued at $18.8 million. Shellback Capital, PDT Partners, and Point72 Asset Management were also very fond of the stock, giving the stock large weights in their portfolios.

Since Ollie’s Bargain Outlet Holdings Inc (NASDAQ:OLLI) has experienced declining sentiment from the entirety of the hedge funds we track, it’s easy to see that there is a sect of funds who were dropping their entire stakes by the end of the third quarter. It’s worth mentioning that Lee Ainslie’s Maverick Capital cut the largest stake of the “upper crust” of funds monitored by Insider Monkey, valued at an estimated $33.9 million in stock. Israel Englander’s fund, Millennium Management, also sold off its stock, about $28.4 million worth. These moves are interesting, as aggregate hedge fund interest dropped by 2 funds by the end of the third quarter.

As you can see these stocks had an average of 17 hedge funds with bullish positions and the average amount invested in these stocks was $321 million. That figure was $155 million in OLLI’s case. Gentex Corporation (NASDAQ:GNTX) is the most popular stock in this table. On the other hand New York Community Bancorp, Inc. (NYSE:NYCB-U) is the least popular one with only 3 bullish hedge fund positions. Ollie’s Bargain Outlet Holdings Inc (NASDAQ:OLLI) is not the most popular stock in this group but hedge fund interest is still above average. Our calculations showed that top 20 most popular stocks among hedge funds returned 6.2% in Q2 through June 19th and outperformed the S&P 500 ETF (SPY) by nearly 3 percentage points. Hedge funds were also right about betting on OLLI as the stock returned 7.2% during the same period and outperformed the market by an even larger margin. Hedge funds were rewarded for their relative bullishness.