Is Monarch Casino & Resort, Inc. (NASDAQ:MCRI) a good investment right now? We check hedge fund and billionaire investor sentiment before delving into hours of research. Hedge funds spend millions of dollars on Ivy League graduates, expert networks, and get tips from investment bankers and industry insiders. Sure they sometimes fail miserably, but their consensus stock picks historically outperformed the market after adjusting for known risk factors.

Hedge fund interest in Monarch Casino & Resort, Inc. (NASDAQ:MCRI) shares was flat at the end of last quarter. This is usually a negative indicator. At the end of this article we will also compare MCRI to other stocks including Banco Latinoamericano de Comercio Exterior, S.A. (NYSE:BLX), ArcBest Corp (NASDAQ:ARCB), and Armada Hoffler Properties Inc (NYSE:AHH) to get a better sense of its popularity.

What have hedge funds been doing with Monarch Casino & Resort, Inc. (NASDAQ:MCRI)?

At the end of the first quarter, a total of 10 of the hedge funds tracked by Insider Monkey held long positions in this stock, a change of 0% from the fourth quarter of 2018. The graph below displays the number of hedge funds with bullish position in MCRI over the last 15 quarters. With the smart money’s capital changing hands, there exists an “upper tier” of notable hedge fund managers who were increasing their stakes meaningfully (or already accumulated large positions). 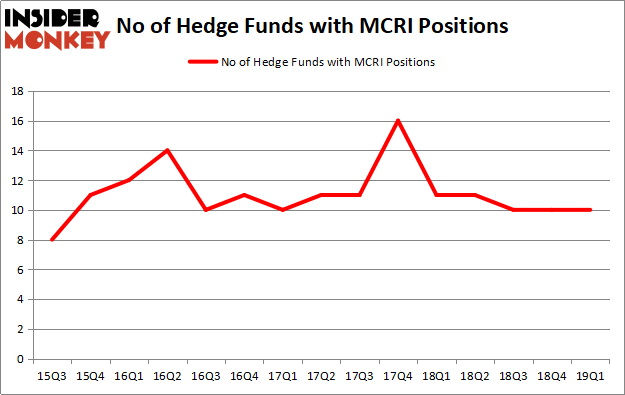 According to Insider Monkey’s hedge fund database, Park West Asset Management, managed by Peter S. Park, holds the most valuable position in Monarch Casino & Resort, Inc. (NASDAQ:MCRI). Park West Asset Management has a $65 million position in the stock, comprising 2.9% of its 13F portfolio. Sitting at the No. 2 spot is Bryant Regan of Lafitte Capital Management, with a $44.3 million position; 22.7% of its 13F portfolio is allocated to the stock. Some other professional money managers with similar optimism contain Jim Simons’s Renaissance Technologies, Richard Driehaus’s Driehaus Capital and Brandon Osten’s Venator Capital Management.

We view hedge fund activity in the stock unfavorable, but in this case there was only a single hedge fund selling its entire position: Millennium Management. One hedge fund selling its entire position doesn’t always imply a bearish intent. Theoretically a hedge fund may decide to sell a promising position in order to invest the proceeds in a more promising idea. However, we don’t think this is the case in this case because only one of the 800+ hedge funds tracked by Insider Monkey identified as a viable investment and initiated a position in the stock (that fund was Winton Capital Management).

As you can see these stocks had an average of 8.75 hedge funds with bullish positions and the average amount invested in these stocks was $35 million. That figure was $130 million in MCRI’s case. ArcBest Corp (NASDAQ:ARCB) is the most popular stock in this table. On the other hand Banco Latinoamericano de Comercio Exterior, S.A. (NYSE:BLX) is the least popular one with only 1 bullish hedge fund positions. Monarch Casino & Resort, Inc. (NASDAQ:MCRI) is not the most popular stock in this group but hedge fund interest is still above average. This is a slightly positive signal but we’d rather spend our time researching stocks that hedge funds are piling on. Our calculations showed that top 20 most popular stocks among hedge funds returned 6.2% in Q2 through June 19th and outperformed the S&P 500 ETF (SPY) by nearly 3 percentage points. Unfortunately MCRI wasn’t nearly as popular as these 20 stocks and hedge funds that were betting on MCRI were disappointed as the stock returned -2.7% during the same period and underperformed the market. If you are interested in investing in large cap stocks with huge upside potential, you should check out the top 20 most popular stocks among hedge funds as 13 of these stocks already outperformed the market so far in Q2.