The latest 13F reporting period has come and gone, and Insider Monkey is again at the forefront when it comes to making use of this gold mine of data. We have processed the filings of the more than 700 world-class investment firms that we track and now have access to the collective wisdom contained in these filings, which are based on their March 31 holdings, data that is available nowhere else. Should you consider Molson Coors Brewing Company (NYSE:TAP) for your portfolio? We’ll look to this invaluable collective wisdom for the answer.

Molson Coors Brewing Company (NYSE:TAP) investors should pay attention to a decrease in enthusiasm from smart money of late. TAP was in 27 hedge funds’ portfolios at the end of the first quarter of 2019. There were 28 hedge funds in our database with TAP holdings at the end of the previous quarter. Our calculations also showed that TAP isn’t among the 30 most popular stocks among hedge funds.

How have hedgies been trading Molson Coors Brewing Company (NYSE:TAP)?

At Q1’s end, a total of 27 of the hedge funds tracked by Insider Monkey were bullish on this stock, a change of -4% from one quarter earlier. Below, you can check out the change in hedge fund sentiment towards TAP over the last 15 quarters. With hedge funds’ sentiment swirling, there exists a few noteworthy hedge fund managers who were upping their stakes meaningfully (or already accumulated large positions). 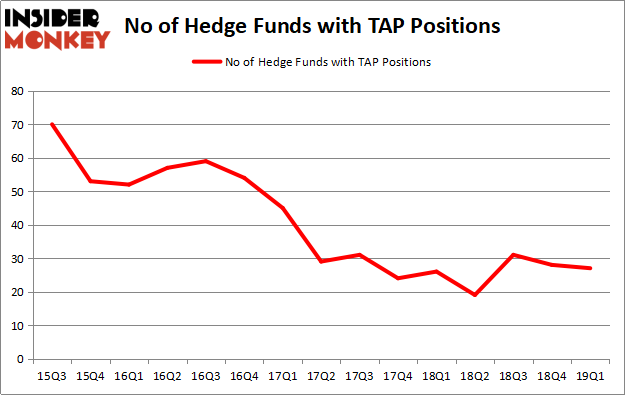 When looking at the institutional investors followed by Insider Monkey, Ariel Investments, managed by John W. Rogers, holds the largest position in Molson Coors Brewing Company (NYSE:TAP). Ariel Investments has a $66 million position in the stock, comprising 0.8% of its 13F portfolio. Sitting at the No. 2 spot is Arlington Value Capital, led by Allan Mecham and Ben Raybould, holding a $34.4 million position; 2.4% of its 13F portfolio is allocated to the stock. Other hedge funds and institutional investors that are bullish consist of Ric Dillon’s Diamond Hill Capital, Seth Rosen’s Nitorum Capital and Noam Gottesman’s GLG Partners.

Due to the fact that Molson Coors Brewing Company (NYSE:TAP) has faced a decline in interest from the entirety of the hedge funds we track, we can see that there is a sect of hedgies that elected to cut their full holdings in the third quarter. At the top of the heap, Dmitry Balyasny’s Balyasny Asset Management said goodbye to the largest stake of the 700 funds followed by Insider Monkey, totaling close to $16.7 million in stock. Joel Greenblatt’s fund, Gotham Asset Management, also said goodbye to its stock, about $14.5 million worth. These transactions are intriguing to say the least, as aggregate hedge fund interest was cut by 1 funds in the third quarter.

As you can see these stocks had an average of 24.75 hedge funds with bullish positions and the average amount invested in these stocks was $508 million. That figure was $318 million in TAP’s case. Masco Corporation (NYSE:MAS) is the most popular stock in this table. On the other hand Brookfield Infrastructure Partners L.P. (NYSE:BIP) is the least popular one with only 7 bullish hedge fund positions. Molson Coors Brewing Company (NYSE:TAP) is not the most popular stock in this group but hedge fund interest is still above average. This is a slightly positive signal but we’d rather spend our time researching stocks that hedge funds are piling on. Our calculations showed that top 20 most popular stocks among hedge funds returned 1.9% in Q2 through May 30th and outperformed the S&P 500 ETF (SPY) by more than 3 percentage points. Unfortunately TAP wasn’t nearly as popular as these 20 stocks and hedge funds that were betting on TAP were disappointed as the stock returned -8.2% during the same period and underperformed the market. If you are interested in investing in large cap stocks with huge upside potential, you should check out the top 20 most popular stocks among hedge funds as 13 of these stocks already outperformed the market so far in Q2.