Our extensive research has shown that imitating the smart money can generate significant returns for retail investors, which is why we track nearly 750 active prominent money managers and analyze their quarterly 13F filings. The stocks that are heavily bought by hedge funds historically outperformed the market, though there is no shortage of high profile failures like hedge funds’ 2018 losses in Facebook and Apple. Let’s take a closer look at what the funds we track think about Molina Healthcare, Inc. (NYSE:MOH) in this article.

Molina Healthcare, Inc. (NYSE:MOH) investors should pay attention to an increase in hedge fund interest in recent months. MOH was in 30 hedge funds’ portfolios at the end of the first quarter of 2019. There were 27 hedge funds in our database with MOH positions at the end of the previous quarter. Our calculations also showed that MOH isn’t among the 30 most popular stocks among hedge funds.

In the eyes of most traders, hedge funds are viewed as slow, old investment vehicles of years past. While there are greater than 8000 funds trading at present, We hone in on the bigwigs of this group, approximately 750 funds. These investment experts shepherd the majority of the smart money’s total capital, and by shadowing their highest performing equity investments, Insider Monkey has deciphered many investment strategies that have historically beaten the broader indices. Insider Monkey’s flagship hedge fund strategy outrun the S&P 500 index by around 5 percentage points annually since its inception in May 2014 through the end of May. We were able to generate large returns even by identifying short candidates. Our portfolio of short stocks lost 30.9% since February 2017 (through May 30th) even though the market was up nearly 24% during the same period. We just shared a list of 5 short targets in our latest quarterly update and they are already down an average of 11.9% in less than a couple of weeks whereas our long picks outperformed the market by 2 percentage points in this volatile 2 week period.

At Q1’s end, a total of 30 of the hedge funds tracked by Insider Monkey held long positions in this stock, a change of 11% from one quarter earlier. By comparison, 31 hedge funds held shares or bullish call options in MOH a year ago. With hedge funds’ sentiment swirling, there exists a few key hedge fund managers who were boosting their stakes considerably (or already accumulated large positions). 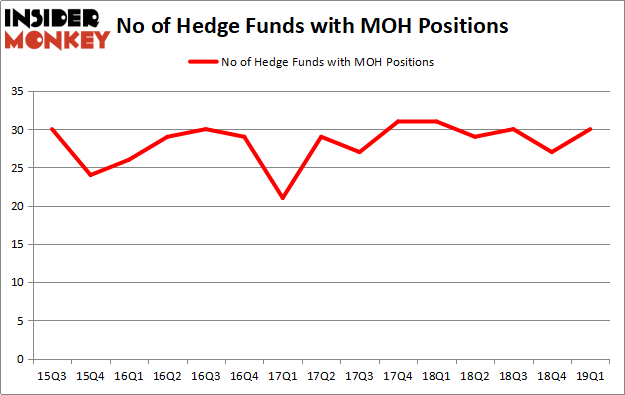 The largest stake in Molina Healthcare, Inc. (NYSE:MOH) was held by Renaissance Technologies, which reported holding $524.6 million worth of stock at the end of March. It was followed by AQR Capital Management with a $102.5 million position. Other investors bullish on the company included Partner Fund Management, Two Sigma Advisors, and D E Shaw.

Consequently, some big names were breaking ground themselves. Polar Capital, managed by Brian Ashford-Russell and Tim Woolley, initiated the most valuable position in Molina Healthcare, Inc. (NYSE:MOH). Polar Capital had $28.5 million invested in the company at the end of the quarter. Lee Ainslie’s Maverick Capital also made a $7.1 million investment in the stock during the quarter. The other funds with new positions in the stock are Jeffrey Talpins’s Element Capital Management, Ben Levine, Andrew Manuel and Stefan Renold’s LMR Partners, and Josh Donfeld and David Rogers’s Castle Hook Partners.

As you can see these stocks had an average of 33.75 hedge funds with bullish positions and the average amount invested in these stocks was $1096 million. That figure was $1026 million in MOH’s case. Carvana Co. (NYSE:CVNA) is the most popular stock in this table. On the other hand Alleghany Corporation (NYSE:Y) is the least popular one with only 23 bullish hedge fund positions. Molina Healthcare, Inc. (NYSE:MOH) is not the least popular stock in this group but hedge fund interest is still below average. This is a slightly negative signal and we’d rather spend our time researching stocks that hedge funds are piling on. Our calculations showed that top 20 most popular stocks among hedge funds returned 1.9% in Q2 through May 30th and outperformed the S&P 500 ETF (SPY) by more than 3 percentage points. Unfortunately MOH wasn’t nearly as popular as these 20 stocks (hedge fund sentiment was quite bearish); MOH investors were disappointed as the stock returned -5.1% during the same time period and underperformed the market. If you are interested in investing in large cap stocks with huge upside potential, you should check out the top 20 most popular stocks among hedge funds as 13 of these stocks already outperformed the market so far in Q2.