MasTec, Inc. (NYSE:MTZ) has experienced a decrease in enthusiasm from smart money lately. Our calculations also showed that MTZ isn’t among the 30 most popular stocks among hedge funds. 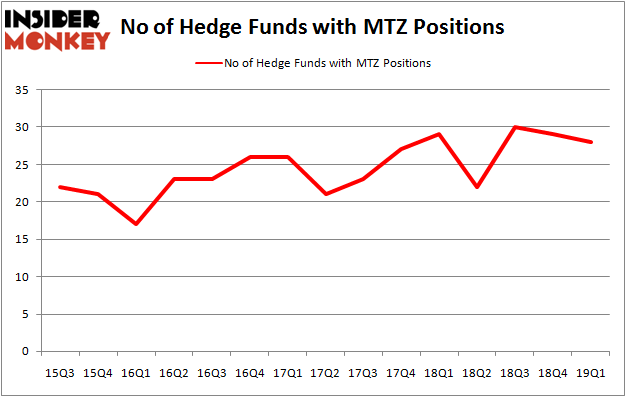 Among these funds, Peconic Partners LLC held the most valuable stake in MasTec, Inc. (NYSE:MTZ), which was worth $636.5 million at the end of the first quarter. On the second spot was Alyeska Investment Group which amassed $45.5 million worth of shares. Moreover, Citadel Investment Group, SG Capital Management, and Millennium Management were also bullish on MasTec, Inc. (NYSE:MTZ), allocating a large percentage of their portfolios to this stock.

Judging by the fact that MasTec, Inc. (NYSE:MTZ) has witnessed falling interest from the smart money, logic holds that there lies a certain “tier” of money managers that slashed their entire stakes by the end of the third quarter. Intriguingly, Jonathan Barrett and Paul Segal’s Luminus Management dumped the largest stake of the 700 funds followed by Insider Monkey, totaling about $16.5 million in stock, and Doug Gordon, Jon Hilsabeck and Don Jabro’s Shellback Capital was right behind this move, as the fund said goodbye to about $16.2 million worth. These moves are intriguing to say the least, as total hedge fund interest fell by 1 funds by the end of the third quarter.

As you can see these stocks had an average of 19.25 hedge funds with bullish positions and the average amount invested in these stocks was $224 million. That figure was $875 million in MTZ’s case. Churchill Downs Incorporated (NASDAQ:CHDN) is the most popular stock in this table. On the other hand Apple Hospitality REIT Inc (NYSE:APLE) is the least popular one with only 13 bullish hedge fund positions. MasTec, Inc. (NYSE:MTZ) is not the most popular stock in this group but hedge fund interest is still above average. Our calculations showed that top 20 most popular stocks among hedge funds returned 1.9% in Q2 through May 30th and outperformed the S&P 500 ETF (SPY) by more than 3 percentage points. Hedge funds were also right about betting on MTZ, though not to the same extent, as the stock returned -1.2% during the same time frame and outperformed the market as well.