The elite funds run by legendary investors such as David Tepper and Dan Loeb make hundreds of millions of dollars for themselves and their investors by spending enormous resources doing research on small cap stocks that big investment banks don’t follow. Because of their pay structures, they have strong incentives to do the research necessary to beat the market. That’s why we pay close attention to what they think in small cap stocks. In this article, we take a closer look at Marcus & Millichap Inc (NYSE:MMI) from the perspective of those elite funds.

Is Marcus & Millichap Inc (NYSE:MMI) a bargain? Hedge funds are in a bearish mood. The number of long hedge fund positions decreased by 1 recently. Our calculations also showed that MMI isn’t among the 30 most popular stocks among hedge funds.

If you’d ask most traders, hedge funds are perceived as underperforming, old investment vehicles of yesteryear. While there are more than 8000 funds in operation today, Our researchers choose to focus on the leaders of this group, about 750 funds. These investment experts orchestrate most of all hedge funds’ total asset base, and by monitoring their unrivaled investments, Insider Monkey has unsheathed various investment strategies that have historically outstripped Mr. Market. Insider Monkey’s flagship hedge fund strategy surpassed the S&P 500 index by around 5 percentage points annually since its inception in May 2014 through June 18th. We were able to generate large returns even by identifying short candidates. Our portfolio of short stocks lost 28.2% since February 2017 (through June 18th) even though the market was up nearly 30% during the same period. We just shared a list of 5 short targets in our latest quarterly update and they are already down an average of 8.2% in a month whereas our long picks outperformed the market by 2.5 percentage points in this volatile 5 week period (our long picks also beat the market by 15 percentage points so far this year).

What does smart money think about Marcus & Millichap Inc (NYSE:MMI)? 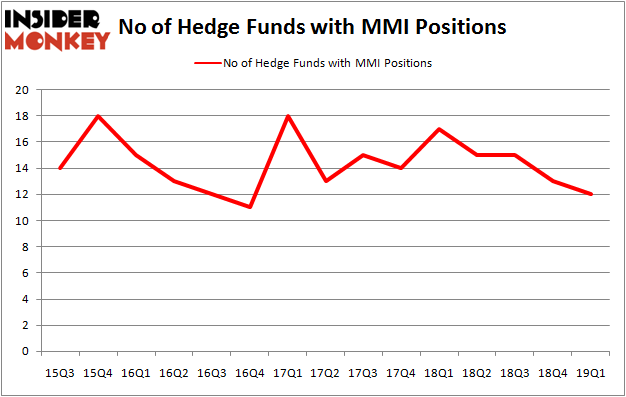 Among these funds, Royce & Associates held the most valuable stake in Marcus & Millichap Inc (NYSE:MMI), which was worth $112.2 million at the end of the first quarter. On the second spot was Renaissance Technologies which amassed $5.7 million worth of shares. Moreover, Two Sigma Advisors, Sprott Asset Management, and Marshall Wace LLP were also bullish on Marcus & Millichap Inc (NYSE:MMI), allocating a large percentage of their portfolios to this stock.

Judging by the fact that Marcus & Millichap Inc (NYSE:MMI) has faced falling interest from the entirety of the hedge funds we track, logic holds that there lies a certain “tier” of hedgies that elected to cut their entire stakes by the end of the third quarter. It’s worth mentioning that Ken Griffin’s Citadel Investment Group dumped the biggest position of the 700 funds followed by Insider Monkey, valued at an estimated $0.7 million in stock. Michael Platt and William Reeves’s fund, BlueCrest Capital Mgmt., also dumped its stock, about $0.3 million worth. These moves are intriguing to say the least, as total hedge fund interest fell by 1 funds by the end of the third quarter.

As you can see these stocks had an average of 21.5 hedge funds with bullish positions and the average amount invested in these stocks was $214 million. That figure was $133 million in MMI’s case. Arch Coal, Inc. (NYSE:ARCH) is the most popular stock in this table. On the other hand Mueller Water Products, Inc. (NYSE:MWA) is the least popular one with only 18 bullish hedge fund positions. Compared to these stocks Marcus & Millichap Inc (NYSE:MMI) is even less popular than MWA. Hedge funds dodged a bullet by taking a bearish stance towards MMI. Our calculations showed that the top 20 most popular hedge fund stocks returned 6.2% in Q2 through June 19th and outperformed the S&P 500 ETF (SPY) by nearly 3 percentage points. Unfortunately MMI wasn’t nearly as popular as these 20 stocks (hedge fund sentiment was very bearish); MMI investors were disappointed as the stock returned -24.2% during the same time frame and underperformed the market. If you are interested in investing in large cap stocks with huge upside potential, you should check out the top 20 most popular stocks among hedge funds as 13 of these stocks already outperformed the market so far in the second quarter.