It was a rough fourth quarter for many hedge funds, which were naturally unable to overcome the big dip in the broad market, as the S&P 500 fell by about 4.8% during 2018 and average hedge fund losing about 1%. The Russell 2000, composed of smaller companies, performed even worse, trailing the S&P by more than 6 percentage points, as investors fled less-known quantities for safe havens. Luckily hedge funds were shifting their holdings into large-cap stocks. The 20 most popular hedge fund stocks actually generated an average return of 18.7% so far in 2019 and outperformed the S&P 500 ETF by 6.6 percentage points. We are done processing the latest 13f filings and in this article we will study how hedge fund sentiment towards Live Oak Bancshares Inc (NASDAQ:LOB) changed during the first quarter.

Is Live Oak Bancshares Inc (NASDAQ:LOB) the right pick for your portfolio? Prominent investors are in a pessimistic mood. The number of bullish hedge fund bets shrunk by 1 in recent months. Our calculations also showed that LOB isn’t among the 30 most popular stocks among hedge funds. 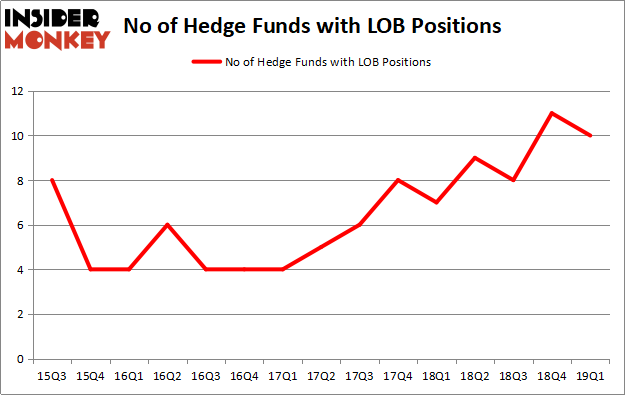 Among these funds, Mendon Capital Advisors held the most valuable stake in Live Oak Bancshares Inc (NASDAQ:LOB), which was worth $17.7 million at the end of the first quarter. On the second spot was Select Equity Group which amassed $7.3 million worth of shares. Moreover, Two Sigma Advisors, Citadel Investment Group, and Millennium Management were also bullish on Live Oak Bancshares Inc (NASDAQ:LOB), allocating a large percentage of their portfolios to this stock.

Judging by the fact that Live Oak Bancshares Inc (NASDAQ:LOB) has experienced a decline in interest from the entirety of the hedge funds we track, it’s safe to say that there lies a certain “tier” of hedge funds who sold off their full holdings in the third quarter. Intriguingly, Richard Driehaus’s Driehaus Capital said goodbye to the biggest stake of the 700 funds followed by Insider Monkey, comprising about $1.9 million in stock, and Andrew Feldstein and Stephen Siderow’s Blue Mountain Capital was right behind this move, as the fund cut about $0.4 million worth. These bearish behaviors are interesting, as aggregate hedge fund interest was cut by 1 funds in the third quarter.

As you can see these stocks had an average of 14.75 hedge funds with bullish positions and the average amount invested in these stocks was $98 million. That figure was $31 million in LOB’s case. Quotient Limited (NASDAQ:QTNT) is the most popular stock in this table. On the other hand Plug Power, Inc. (NASDAQ:PLUG) is the least popular one with only 7 bullish hedge fund positions. Live Oak Bancshares Inc (NASDAQ:LOB) is not the least popular stock in this group but hedge fund interest is still below average. Our calculations showed that top 20 most popular stocks among hedge funds returned 6.2% in Q2 through June 19th and outperformed the S&P 500 ETF (SPY) by nearly 3 percentage points. A small number of hedge funds were also right about betting on LOB as the stock returned 17.7% during the same time frame and outperformed the market by an even larger margin.