Insider Monkey has processed numerous 13F filings of hedge funds and successful investors to create an extensive database of hedge fund holdings. The 13F filings show the hedge funds’ and successful investors’ positions as of the end of the first quarter. You can find write-ups about an individual hedge fund’s trades on numerous financial news websites. However, in this article we will take a look at their collective moves and analyze what the smart money thinks of Liberty Global Plc (NASDAQ:LBTYK) based on that data.

Liberty Global Plc (NASDAQ:LBTYK) investors should pay attention to an increase in activity from the world’s largest hedge funds recently. LBTYK was in 33 hedge funds’ portfolios at the end of March. There were 32 hedge funds in our database with LBTYK positions at the end of the previous quarter. Our calculations also showed that lbtyk isn’t among the 30 most popular stocks among hedge funds.

In today’s marketplace there are a large number of metrics shareholders put to use to analyze their stock investments. A pair of the less utilized metrics are hedge fund and insider trading moves. We have shown that, historically, those who follow the top picks of the best investment managers can trounce the S&P 500 by a healthy margin (see the details here). 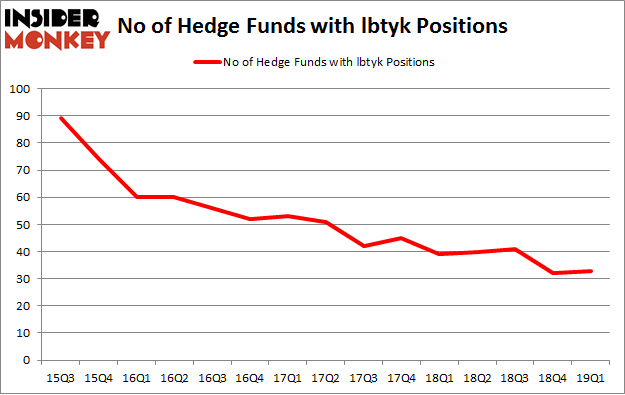 The largest stake in Liberty Global Plc (NASDAQ:LBTYK) was held by Baupost Group, which reported holding $946.4 million worth of stock at the end of March. It was followed by Eagle Capital Management with a $928.3 million position. Other investors bullish on the company included Berkshire Hathaway, Route One Investment Company, and Foxhaven Asset Management.

As one would reasonably expect, key hedge funds were leading the bulls’ herd. Incline Global Management, managed by Jeff Lignelli, created the most valuable position in Liberty Global Plc (NASDAQ:LBTYK). Incline Global Management had $31.6 million invested in the company at the end of the quarter. Michael A. Price and Amos Meron’s Empyrean Capital Partners also initiated a $27.1 million position during the quarter. The other funds with brand new LBTYK positions are Michael Hintze’s CQS Cayman LP, Francis Cueto’s Asturias Capital, and Mark Wolfson and Jamie Alexander’s Jasper Ridge Partners.

As you can see these stocks had an average of 23.5 hedge funds with bullish positions and the average amount invested in these stocks was $824 million. That figure was $3302 million in LBTYK’s case. The Hartford Financial Services Group Inc (NYSE:HIG) is the most popular stock in this table. On the other hand Plains All American Pipeline, L.P. (NYSE:PAA) is the least popular one with only 8 bullish hedge fund positions. Liberty Global Plc (NASDAQ:LBTYK) is not the most popular stock in this group but hedge fund interest is still above average. Our calculations showed that top 20 most popular stocks among hedge funds returned 1.9% in Q2 through May 30th and outperformed the S&P 500 ETF (SPY) by more than 3 percentage points. Hedge funds were also right about betting on LBTYK, though not to the same extent, as the stock returned -0.9% during the same time frame and outperformed the market as well.