A whopping number of 13F filings filed with U.S. Securities and Exchange Commission has been processed by Insider Monkey so that individual investors can look at the overall hedge fund sentiment towards the stocks included in their watchlists. These freshly-submitted public filings disclose money managers’ equity positions as of the end of the three-month period that ended March 31, so let’s proceed with the discussion of the hedge fund sentiment on Laboratory Corp. of America Holdings (NYSE:LH).

Is Laboratory Corp. of America Holdings (NYSE:LH) undervalued? The best stock pickers are getting more optimistic. The number of bullish hedge fund positions advanced by 1 recently. Our calculations also showed that LH isn’t among the 30 most popular stocks among hedge funds. LH was in 39 hedge funds’ portfolios at the end of March. There were 38 hedge funds in our database with LH positions at the end of the previous quarter. 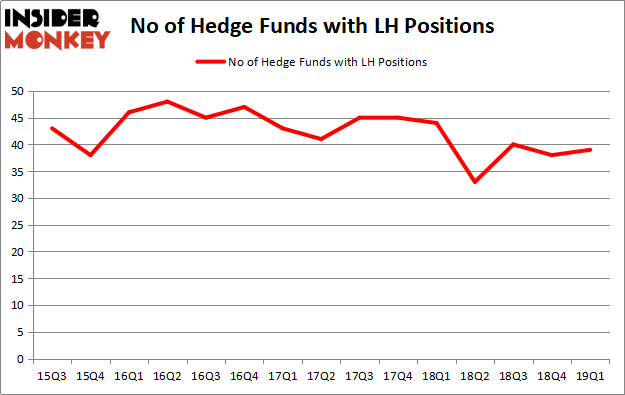 As one would reasonably expect, specific money managers were breaking ground themselves. Point72 Asset Management, managed by Steve Cohen, assembled the most outsized position in Laboratory Corp. of America Holdings (NYSE:LH). Point72 Asset Management had $103.7 million invested in the company at the end of the quarter. Roberto Mignone’s Bridger Management also made a $50.6 million investment in the stock during the quarter. The other funds with brand new LH positions are Brandon Haley’s Holocene Advisors, Jeffrey Talpins’s Element Capital Management, and Vishal Saluja and Pham Quang’s Endurant Capital Management.

As you can see these stocks had an average of 31.25 hedge funds with bullish positions and the average amount invested in these stocks was $780 million. That figure was $1199 million in LH’s case. Citizens Financial Group Inc (NYSE:CFG) is the most popular stock in this table. On the other hand Loews Corporation (NYSE:L) is the least popular one with only 20 bullish hedge fund positions. Laboratory Corp. of America Holdings (NYSE:LH) is not the most popular stock in this group but hedge fund interest is still above average. Our calculations showed that top 20 most popular stocks among hedge funds returned 1.9% in Q2 through May 30th and outperformed the S&P 500 ETF (SPY) by more than 3 percentage points. Hedge funds were also right about betting on LH as the stock returned 6.8% during the same period and outperformed the market by an even larger margin. Hedge funds were rewarded for their relative bullishness.