The elite funds run by legendary investors such as David Tepper and Dan Loeb make hundreds of millions of dollars for themselves and their investors by spending enormous resources doing research on small cap stocks that big investment banks don’t follow. Because of their pay structures, they have strong incentives to do the research necessary to beat the market. That’s why we pay close attention to what they think in small cap stocks. In this article, we take a closer look at Intrepid Potash, Inc. (NYSE:IPI) from the perspective of those elite funds.

Is Intrepid Potash, Inc. (NYSE:IPI) worth your attention right now? Prominent investors are in a bearish mood. The number of long hedge fund bets retreated by 3 recently. Our calculations also showed that IPI isn’t among the 30 most popular stocks among hedge funds.

To the average investor there are numerous gauges investors use to grade stocks. Two of the most useful gauges are hedge fund and insider trading activity. Our researchers have shown that, historically, those who follow the top picks of the elite investment managers can outclass their index-focused peers by a very impressive amount (see the details here).

At Q1’s end, a total of 14 of the hedge funds tracked by Insider Monkey were long this stock, a change of -18% from one quarter earlier. By comparison, 10 hedge funds held shares or bullish call options in IPI a year ago. With the smart money’s capital changing hands, there exists an “upper tier” of key hedge fund managers who were upping their stakes considerably (or already accumulated large positions). 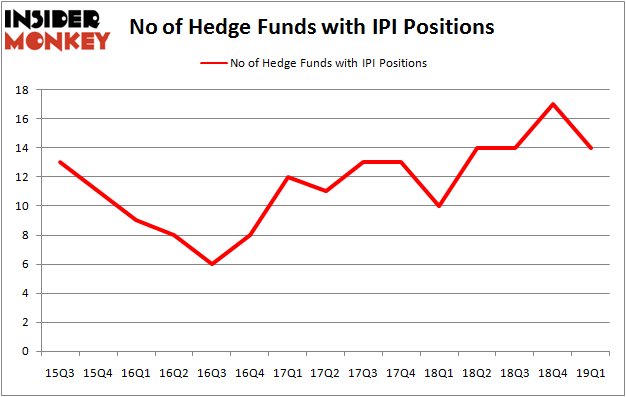 Among these funds, Royce & Associates held the most valuable stake in Intrepid Potash, Inc. (NYSE:IPI), which was worth $9 million at the end of the first quarter. On the second spot was Millennium Management which amassed $6.2 million worth of shares. Moreover, Prescott Group Capital Management, Marshall Wace LLP, and Citadel Investment Group were also bullish on Intrepid Potash, Inc. (NYSE:IPI), allocating a large percentage of their portfolios to this stock.

Judging by the fact that Intrepid Potash, Inc. (NYSE:IPI) has experienced declining sentiment from hedge fund managers, it’s easy to see that there lies a certain “tier” of hedge funds who sold off their entire stakes last quarter. At the top of the heap, Benjamin A. Smith’s Laurion Capital Management said goodbye to the largest stake of all the hedgies followed by Insider Monkey, valued at close to $0.8 million in stock. Daniel Arbess’s fund, Perella Weinberg Partners, also dumped its stock, about $0.6 million worth. These moves are interesting, as total hedge fund interest was cut by 3 funds last quarter.

As you can see these stocks had an average of 4.5 hedge funds with bullish positions and the average amount invested in these stocks was $12 million. That figure was $34 million in IPI’s case. Crawford & Company (NYSE:CRD) is the most popular stock in this table. On the other hand Mesoblast Limited (NASDAQ:MESO) is the least popular one with only 1 bullish hedge fund positions. Compared to these stocks Intrepid Potash, Inc. (NYSE:IPI) is more popular among hedge funds. Our calculations showed that top 20 most popular stocks among hedge funds returned 6.2% in Q2 through June 19th and outperformed the S&P 500 ETF (SPY) by nearly 3 percentage points. Unfortunately IPI wasn’t nearly as popular as these 20 stocks and hedge funds that were betting on IPI were disappointed as the stock returned -13.2% during the same period and underperformed the market. If you are interested in investing in large cap stocks with huge upside potential, you should check out the top 20 most popular stocks among hedge funds as 13 of these stocks already outperformed the market in Q2.