A market surge in the first quarter, spurred by easing global macroeconomic concerns and Powell’s pivot ended up having a positive impact on the markets and many hedge funds as a result. The stocks of smaller companies which were especially hard hit during the fourth quarter slightly outperformed the market during the first quarter. Unfortunately, Trump is unpredictable and volatility returned in the second quarter and smaller-cap stocks went back to selling off. We finished compiling the latest 13F filings to get an idea about what hedge funds are thinking about the overall market as well as individual stocks. In this article we will study the hedge fund sentiment to see how those concerns affected their ownership of Hudson Ltd. (NYSE:HUD) during the quarter.

Hudson Ltd. (NYSE:HUD) was in 15 hedge funds’ portfolios at the end of March. HUD has seen an increase in support from the world’s most elite money managers recently. There were 12 hedge funds in our database with HUD holdings at the end of the previous quarter. Our calculations also showed that HUD isn’t among the 30 most popular stocks among hedge funds.

According to most investors, hedge funds are perceived as unimportant, outdated financial vehicles of yesteryear. While there are greater than 8000 funds trading today, Our researchers hone in on the upper echelon of this group, about 750 funds. It is estimated that this group of investors administer the majority of the smart money’s total asset base, and by tailing their first-class picks, Insider Monkey has unearthed various investment strategies that have historically outstripped Mr. Market. Insider Monkey’s flagship hedge fund strategy surpassed the S&P 500 index by around 5 percentage points per annum since its inception in May 2014 through June 18th. We were able to generate large returns even by identifying short candidates. Our portfolio of short stocks lost 28.2% since February 2017 (through June 18th) even though the market was up nearly 30% during the same period. We just shared a list of 5 short targets in our latest quarterly update and they are already down an average of 8.2% in a month whereas our long picks outperformed the market by 2.5 percentage points in this volatile 5 week period (our long picks also beat the market by 15 percentage points so far this year).

How have hedgies been trading Hudson Ltd. (NYSE:HUD)?

At the end of the first quarter, a total of 15 of the hedge funds tracked by Insider Monkey were bullish on this stock, a change of 25% from one quarter earlier. On the other hand, there were a total of 20 hedge funds with a bullish position in HUD a year ago. With the smart money’s capital changing hands, there exists a select group of noteworthy hedge fund managers who were increasing their stakes substantially (or already accumulated large positions). 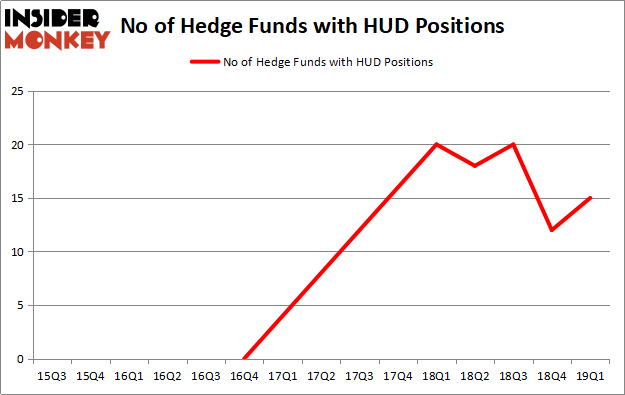 Among these funds, Citadel Investment Group held the most valuable stake in Hudson Ltd. (NYSE:HUD), which was worth $7.7 million at the end of the first quarter. On the second spot was Renaissance Technologies which amassed $5.3 million worth of shares. Moreover, Two Sigma Advisors, D E Shaw, and Balyasny Asset Management were also bullish on Hudson Ltd. (NYSE:HUD), allocating a large percentage of their portfolios to this stock.

As you can see these stocks had an average of 7.75 hedge funds with bullish positions and the average amount invested in these stocks was $166 million. That figure was $32 million in HUD’s case. Hollysys Automation Technologies Ltd (NASDAQ:HOLI) is the most popular stock in this table. On the other hand Tortoise Energy Infrastructure Corporation (NYSE:TYG) is the least popular one with only 2 bullish hedge fund positions. Compared to these stocks Hudson Ltd. (NYSE:HUD) is more popular among hedge funds. Our calculations showed that top 20 most popular stocks among hedge funds returned 6.2% in Q2 through June 19th and outperformed the S&P 500 ETF (SPY) by nearly 3 percentage points. Unfortunately HUD wasn’t nearly as popular as these 20 stocks and hedge funds that were betting on HUD were disappointed as the stock returned 0.9% during the same period and underperformed the market. If you are interested in investing in large cap stocks with huge upside potential, you should check out the top 20 most popular stocks among hedge funds as 13 of these stocks already outperformed the market in Q2.