Our extensive research has shown that imitating the smart money can generate significant returns for retail investors, which is why we track nearly 750 active prominent money managers and analyze their quarterly 13F filings. The stocks that are heavily bought by hedge funds historically outperformed the market, though there is no shortage of high profile failures like hedge funds’ 2018 losses in Facebook and Apple. Let’s take a closer look at what the funds we track think about Helmerich & Payne, Inc. (NYSE:HP) in this article.

Is Helmerich & Payne, Inc. (NYSE:HP) a buy right now? The smart money is taking a bullish view. The number of bullish hedge fund positions went up by 4 lately. Our calculations also showed that HP isn’t among the 30 most popular stocks among hedge funds. HP was in 31 hedge funds’ portfolios at the end of the first quarter of 2019. There were 27 hedge funds in our database with HP positions at the end of the previous quarter. 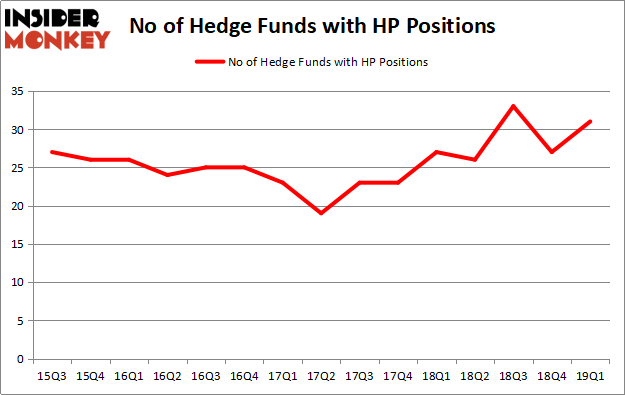 Among these funds, Citadel Investment Group held the most valuable stake in Helmerich & Payne, Inc. (NYSE:HP), which was worth $83.1 million at the end of the first quarter. On the second spot was Fisher Asset Management which amassed $47 million worth of shares. Moreover, AQR Capital Management, Royce & Associates, and Millennium Management were also bullish on Helmerich & Payne, Inc. (NYSE:HP), allocating a large percentage of their portfolios to this stock.

As aggregate interest increased, some big names have been driving this bullishness. Holocene Advisors, managed by Brandon Haley, assembled the most outsized position in Helmerich & Payne, Inc. (NYSE:HP). Holocene Advisors had $9.1 million invested in the company at the end of the quarter. Ray Dalio’s Bridgewater Associates also made a $7.6 million investment in the stock during the quarter. The other funds with new positions in the stock are Alexander Mitchell’s Scopus Asset Management, Paul Marshall and Ian Wace’s Marshall Wace LLP, and Joel Greenblatt’s Gotham Asset Management.

As you can see these stocks had an average of 17 hedge funds with bullish positions and the average amount invested in these stocks was $1369 million. That figure was $399 million in HP’s case. USG Corporation (NYSE:USG) is the most popular stock in this table. On the other hand Cronos Group Inc. (NASDAQ:CRON) is the least popular one with only 7 bullish hedge fund positions. Compared to these stocks Helmerich & Payne, Inc. (NYSE:HP) is more popular among hedge funds. Our calculations showed that top 20 most popular stocks among hedge funds returned 1.9% in Q2 through May 30th and outperformed the S&P 500 ETF (SPY) by more than 3 percentage points. Unfortunately HP wasn’t nearly as popular as these 20 stocks and hedge funds that were betting on HP were disappointed as the stock returned -8.6% during the same period and underperformed the market. If you are interested in investing in large cap stocks with huge upside potential, you should check out the top 20 most popular stocks among hedge funds as 13 of these stocks already outperformed the market in Q2.