While the market driven by short-term sentiment influenced by the accomodative interest rate environment in the US, increasing oil prices and optimism towards the resolution of the trade war with China, many smart money investors kept their cautious approach regarding the current bull run in the first quarter and hedging or reducing many of their long positions. However, as we know, big investors usually buy stocks with strong fundamentals, which is why we believe we can profit from imitating them. In this article, we are going to take a look at the smart money sentiment surrounding Hawaiian Electric Industries, Inc. (NYSE:HE).

Hawaiian Electric Industries, Inc. (NYSE:HE) has seen a decrease in activity from the world’s largest hedge funds lately. Our calculations also showed that HE isn’t among the 30 most popular stocks among hedge funds.

According to most shareholders, hedge funds are perceived as slow, outdated financial tools of the past. While there are more than 8000 funds trading at the moment, We look at the elite of this club, about 750 funds. Most estimates calculate that this group of people direct most of the hedge fund industry’s total capital, and by watching their unrivaled equity investments, Insider Monkey has discovered many investment strategies that have historically outstripped Mr. Market. Insider Monkey’s flagship hedge fund strategy outperformed the S&P 500 index by around 5 percentage points annually since its inception in May 2014 through June 18th. We were able to generate large returns even by identifying short candidates. Our portfolio of short stocks lost 28.2% since February 2017 (through June 18th) even though the market was up nearly 30% during the same period. We just shared a list of 5 short targets in our latest quarterly update and they are already down an average of 8.2% in a month whereas our long picks outperformed the market by 2.5 percentage points in this volatile 5 week period (our long picks also beat the market by 15 percentage points so far this year).

At the end of the first quarter, a total of 12 of the hedge funds tracked by Insider Monkey were long this stock, a change of -8% from the previous quarter. On the other hand, there were a total of 10 hedge funds with a bullish position in HE a year ago. With hedgies’ capital changing hands, there exists a select group of key hedge fund managers who were upping their holdings considerably (or already accumulated large positions). 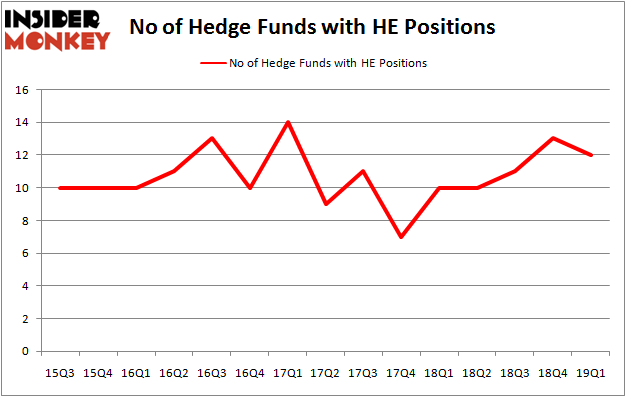 The largest stake in Hawaiian Electric Industries, Inc. (NYSE:HE) was held by ValueAct Capital, which reported holding $58.1 million worth of stock at the end of March. It was followed by Renaissance Technologies with a $31 million position. Other investors bullish on the company included Winton Capital Management, AQR Capital Management, and GLG Partners.

Because Hawaiian Electric Industries, Inc. (NYSE:HE) has witnessed falling interest from hedge fund managers, we can see that there exists a select few funds who sold off their full holdings by the end of the third quarter. Intriguingly, Brian Olson, Baehyun Sung, and Jamie Waters’s Blackstart Capital said goodbye to the largest stake of the 700 funds tracked by Insider Monkey, worth an estimated $19.2 million in stock, and Dmitry Balyasny’s Balyasny Asset Management was right behind this move, as the fund dropped about $0.4 million worth. These bearish behaviors are important to note, as aggregate hedge fund interest was cut by 1 funds by the end of the third quarter.

As you can see these stocks had an average of 16.25 hedge funds with bullish positions and the average amount invested in these stocks was $174 million. That figure was $144 million in HE’s case. Williams-Sonoma, Inc. (NYSE:WSM) is the most popular stock in this table. On the other hand Itaú CorpBanca (NYSE:ITCB) is the least popular one with only 1 bullish hedge fund positions. Hawaiian Electric Industries, Inc. (NYSE:HE) is not the least popular stock in this group but hedge fund interest is still below average. Our calculations showed that top 20 most popular stocks among hedge funds returned 6.2% in Q2 through June 19th and outperformed the S&P 500 ETF (SPY) by nearly 3 percentage points. A small number of hedge funds were also right about betting on HE as the stock returned 7.7% during the same time frame and outperformed the market by an even larger margin.