It was a rough fourth quarter for many hedge funds, which were naturally unable to overcome the big dip in the broad market, as the S&P 500 fell by about 4.8% during 2018 and average hedge fund losing about 1%. The Russell 2000, composed of smaller companies, performed even worse, trailing the S&P by more than 6 percentage points, as investors fled less-known quantities for safe havens. Luckily hedge funds were shifting their holdings into large-cap stocks. The 20 most popular hedge fund stocks actually generated an average return of 18.7% so far in 2019 and outperformed the S&P 500 ETF by 6.6 percentage points. We are done processing the latest 13f filings and in this article we will study how hedge fund sentiment towards Golden Entertainment Inc (NASDAQ:GDEN) changed during the first quarter.

Hedge fund interest in Golden Entertainment Inc (NASDAQ:GDEN) shares was flat at the end of last quarter. This is usually a negative indicator. At the end of this article we will also compare GDEN to other stocks including Gores Metropoulos, Inc. (NASDAQ:GMHI), Bank First National Corporation (NASDAQ:BFC), and Albireo Pharma, Inc. (NASDAQ:ALBO) to get a better sense of its popularity.

To most stock holders, hedge funds are assumed to be underperforming, old financial vehicles of the past. While there are over 8000 funds trading at the moment, Our experts choose to focus on the aristocrats of this group, around 750 funds. Most estimates calculate that this group of people administer the majority of all hedge funds’ total asset base, and by watching their top investments, Insider Monkey has found various investment strategies that have historically outrun Mr. Market. Insider Monkey’s flagship hedge fund strategy defeated the S&P 500 index by around 5 percentage points per year since its inception in May 2014 through June 18th. We were able to generate large returns even by identifying short candidates. Our portfolio of short stocks lost 28.2% since February 2017 (through June 18th) even though the market was up nearly 30% during the same period. We just shared a list of 5 short targets in our latest quarterly update and they are already down an average of 8.2% in a month whereas our long picks outperformed the market by 2.5 percentage points in this volatile 5 week period (our long picks also beat the market by 15 percentage points so far this year).

Heading into the second quarter of 2019, a total of 12 of the hedge funds tracked by Insider Monkey were long this stock, a change of 0% from one quarter earlier. By comparison, 15 hedge funds held shares or bullish call options in GDEN a year ago. With hedgies’ positions undergoing their usual ebb and flow, there exists a select group of key hedge fund managers who were increasing their holdings significantly (or already accumulated large positions). 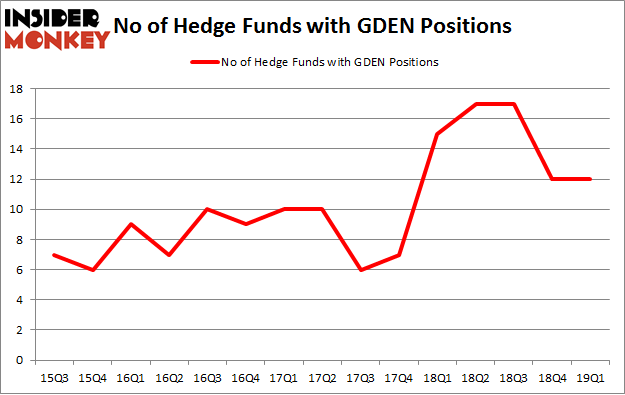 Seeing as Golden Entertainment Inc (NASDAQ:GDEN) has witnessed falling interest from the aggregate hedge fund industry, we can see that there was a specific group of funds that elected to cut their positions entirely last quarter. At the top of the heap, Ken Griffin’s Citadel Investment Group cut the largest investment of the 700 funds tracked by Insider Monkey, comprising about $7.4 million in stock, and David Brown’s Hawk Ridge Management was right behind this move, as the fund said goodbye to about $3.8 million worth. These bearish behaviors are important to note, as total hedge fund interest stayed the same (this is a bearish signal in our experience).

As you can see these stocks had an average of 9.25 hedge funds with bullish positions and the average amount invested in these stocks was $68 million. That figure was $88 million in GDEN’s case. Gores Metropoulos, Inc. (NASDAQ:GMHI) is the most popular stock in this table. On the other hand Tekla Life Sciences Investors (NYSE:HQL) is the least popular one with only 2 bullish hedge fund positions. Golden Entertainment Inc (NASDAQ:GDEN) is not the most popular stock in this group but hedge fund interest is still above average. This is a slightly positive signal but we’d rather spend our time researching stocks that hedge funds are piling on. Our calculations showed that top 20 most popular stocks among hedge funds returned 6.2% in Q2 through June 19th and outperformed the S&P 500 ETF (SPY) by nearly 3 percentage points. Unfortunately GDEN wasn’t nearly as popular as these 20 stocks and hedge funds that were betting on GDEN were disappointed as the stock returned -2% during the same period and underperformed the market. If you are interested in investing in large cap stocks with huge upside potential, you should check out the top 20 most popular stocks among hedge funds as 13 of these stocks already outperformed the market so far in Q2.