After several tireless days we have finished crunching the numbers from nearly 750 13F filings issued by the elite hedge funds and other investment firms that we track at Insider Monkey, which disclosed those firms’ equity portfolios as of March 31. The results of that effort will be put on display in this article, as we share valuable insight into the smart money sentiment towards General Motors Company (NYSE:GM).

Is General Motors Company (NYSE:GM) undervalued? Money managers are turning less bullish. The number of bullish hedge fund positions were cut by 7 recently. Our calculations also showed that gm isn’t among the 30 most popular stocks among hedge funds. GM was in 53 hedge funds’ portfolios at the end of March. There were 60 hedge funds in our database with GM holdings at the end of the previous quarter.

What does the smart money think about General Motors Company (NYSE:GM)? 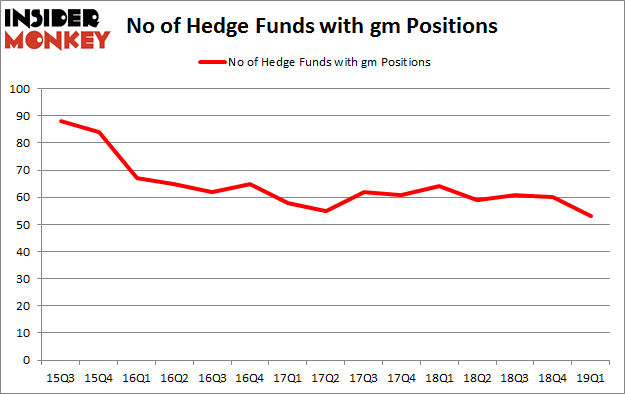 According to Insider Monkey’s hedge fund database, Warren Buffett’s Berkshire Hathaway has the most valuable position in General Motors Company (NYSE:GM), worth close to $2.6812 billion, amounting to 1.3% of its total 13F portfolio. Sitting at the No. 2 spot is Boykin Curry of Eagle Capital Management, with a $756.8 million position; 2.9% of its 13F portfolio is allocated to the company. Other peers that are bullish contain Edgar Wachenheim’s Greenhaven Associates, David Einhorn’s Greenlight Capital and Ric Dillon’s Diamond Hill Capital.

Since General Motors Company (NYSE:GM) has witnessed declining sentiment from the aggregate hedge fund industry, logic holds that there was a specific group of funds that slashed their full holdings by the end of the third quarter. Interestingly, Brandon Haley’s Holocene Advisors dropped the largest investment of all the hedgies watched by Insider Monkey, valued at an estimated $42.6 million in call options, and Seth Wunder’s Black-and-White Capital was right behind this move, as the fund sold off about $33.5 million worth. These transactions are interesting, as total hedge fund interest fell by 7 funds by the end of the third quarter.

As you can see these stocks had an average of 33.25 hedge funds with bullish positions and the average amount invested in these stocks was $1538 million. That figure was $5393 million in GM’s case. S&P Global Inc. (NYSE:SPGI) is the most popular stock in this table. On the other hand Prudential plc (NYSE:PUK) is the least popular one with only 6 bullish hedge fund positions. General Motors Company (NYSE:GM) is not the most popular stock in this group but hedge fund interest is still above average. This is a slightly positive signal but we’d rather spend our time researching stocks that hedge funds are piling on. Our calculations showed that top 20 most popular stocks among hedge funds returned 1.9% in Q2 through May 30th and outperformed the S&P 500 ETF (SPY) by more than 3 percentage points. Unfortunately GM wasn’t nearly as popular as these 20 stocks and hedge funds that were betting on GM were disappointed as the stock returned -6.1% during the same period and underperformed the market. If you are interested in investing in large cap stocks with huge upside potential, you should check out the top 20 most popular stocks among hedge funds as 13 of these stocks already outperformed the market so far in Q2.