FS KKR Capital Corp. (NYSE:FSK) was in 19 hedge funds’ portfolios at the end of the first quarter of 2019. FSK has seen a decrease in enthusiasm from smart money in recent months. There were 20 hedge funds in our database with FSK positions at the end of the previous quarter. Our calculations also showed that fsk isn’t among the 30 most popular stocks among hedge funds.

How have hedgies been trading FS KKR Capital Corp. (NYSE:FSK)?

At the end of the first quarter, a total of 19 of the hedge funds tracked by Insider Monkey were bullish on this stock, a change of -5% from the previous quarter. Below, you can check out the change in hedge fund sentiment towards FSK over the last 15 quarters. With hedge funds’ positions undergoing their usual ebb and flow, there exists a few key hedge fund managers who were increasing their stakes significantly (or already accumulated large positions). 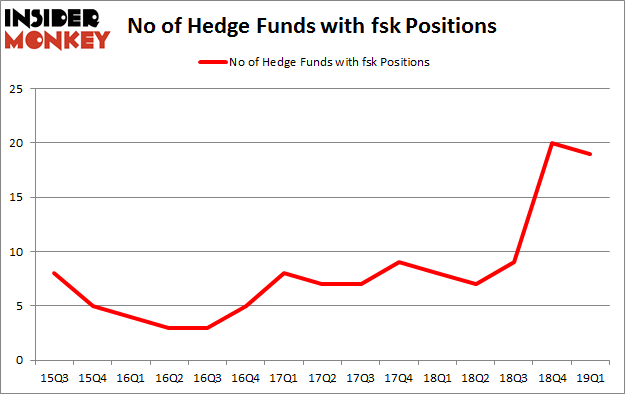 Judging by the fact that FS KKR Capital Corp. (NYSE:FSK) has faced declining sentiment from hedge fund managers, it’s easy to see that there was a specific group of money managers that decided to sell off their positions entirely in the third quarter. At the top of the heap, Peter Rathjens, Bruce Clarke and John Campbell’s Arrowstreet Capital dumped the biggest position of all the hedgies tracked by Insider Monkey, valued at an estimated $10.1 million in stock, and Andrew Weiss’s Weiss Asset Management was right behind this move, as the fund dropped about $4 million worth. These moves are intriguing to say the least, as total hedge fund interest was cut by 1 funds in the third quarter.

As you can see these stocks had an average of 15.75 hedge funds with bullish positions and the average amount invested in these stocks was $352 million. That figure was $202 million in FSK’s case. Tempur Sealy International Inc. (NYSE:TPX) is the most popular stock in this table. On the other hand Manchester United PLC (NYSE:MANU) is the least popular one with only 11 bullish hedge fund positions. FS KKR Capital Corp. (NYSE:FSK) is not the most popular stock in this group but hedge fund interest is still above average. Our calculations showed that top 20 most popular stocks among hedge funds returned 1.9% in Q2 through May 30th and outperformed the S&P 500 ETF (SPY) by more than 3 percentage points. Hedge funds were also right about betting on FSK, though not to the same extent, as the stock returned -0.8% during the same time frame and outperformed the market as well.