The latest 13F reporting period has come and gone, and Insider Monkey is again at the forefront when it comes to making use of this gold mine of data. We have processed the filings of the more than 700 world-class investment firms that we track and now have access to the collective wisdom contained in these filings, which are based on their March 31 holdings, data that is available nowhere else. Should you consider Franklin Resources, Inc. (NYSE:BEN) for your portfolio? We’ll look to this invaluable collective wisdom for the answer.

Franklin Resources, Inc. (NYSE:BEN) shares haven’t seen a lot of action during the first quarter. Overall, hedge fund sentiment was unchanged. The stock was in 28 hedge funds’ portfolios at the end of the first quarter of 2019. The level and the change in hedge fund popularity aren’t the only variables you need to analyze to decipher hedge funds’ perspectives. A stock may witness a boost in popularity but it may still be less popular than similarly priced stocks. That’s why at the end of this article we will examine companies such as Total System Services, Inc. (NYSE:TSS), CGI Inc. (NYSE:GIB), and MSCI Inc (NYSE:MSCI) to gather more data points.

Heading into the second quarter of 2019, a total of 28 of the hedge funds tracked by Insider Monkey held long positions in this stock, a change of 0% from the previous quarter. Below, you can check out the change in hedge fund sentiment towards BEN over the last 15 quarters. So, let’s review which hedge funds were among the top holders of the stock and which hedge funds were making big moves. 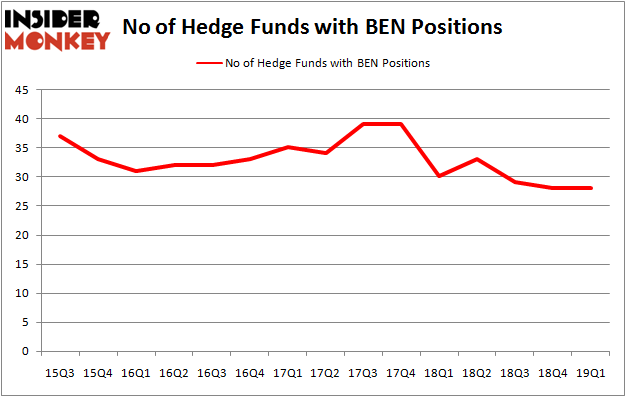 Due to the fact that Franklin Resources, Inc. (NYSE:BEN) has faced a decline in interest from the aggregate hedge fund industry, we can see that there lies a certain “tier” of fund managers that slashed their entire stakes heading into Q3. Interestingly, Jonathon Jacobson’s Highfields Capital Management sold off the biggest stake of the 700 funds tracked by Insider Monkey, totaling an estimated $71.5 million in stock, and Marc Lisker, Glenn Fuhrman and John Phelan’s MSDC Management was right behind this move, as the fund dropped about $15.1 million worth. These transactions are intriguing to say the least, as total hedge fund interest stayed the same (this is a bearish signal in our experience).

As you can see these stocks had an average of 31.25 hedge funds with bullish positions and the average amount invested in these stocks was $670 million. That figure was $820 million in BEN’s case. Total System Services, Inc. (NYSE:TSS) is the most popular stock in this table. On the other hand CGI Inc. (NYSE:GIB) is the least popular one with only 18 bullish hedge fund positions. Franklin Resources, Inc. (NYSE:BEN) is not the least popular stock in this group but hedge fund interest is still below average. Our calculations showed that top 20 most popular stocks among hedge funds returned 1.9% in Q2 through May 30th and outperformed the S&P 500 ETF (SPY) by more than 3 percentage points. A small number of hedge funds were also right about betting on BEN, though not to the same extent, as the stock returned -0.6% during the same time frame and outperformed the market as well.