Concerns over rising interest rates and expected further rate increases have hit several stocks hard during the fourth quarter. Trends reversed 180 degrees during the first quarter amid Powell’s pivot and optimistic expectations towards a trade deal with China. Hedge funds and institutional investors tracked by Insider Monkey usually invest a disproportionate amount of their portfolios in smaller cap stocks. We have been receiving indications that hedge funds were increasing their overall exposure in the first quarter and this is one of the factors behind the recent movements in major indices. In this article, we will take a closer look at hedge fund sentiment towards Flowserve Corporation (NYSE:FLS).

Flowserve Corporation (NYSE:FLS) was in 20 hedge funds’ portfolios at the end of March. FLS investors should be aware of an increase in activity from the world’s largest hedge funds of late. There were 16 hedge funds in our database with FLS holdings at the end of the previous quarter. Our calculations also showed that FLS isn’t among the 30 most popular stocks among hedge funds.

In the 21st century investor’s toolkit there are numerous methods stock traders put to use to grade publicly traded companies. A duo of the most underrated methods are hedge fund and insider trading sentiment. Our researchers have shown that, historically, those who follow the best picks of the top fund managers can trounce the broader indices by a solid margin (see the details here).

Heading into the second quarter of 2019, a total of 20 of the hedge funds tracked by Insider Monkey were long this stock, a change of 25% from the fourth quarter of 2018. On the other hand, there were a total of 15 hedge funds with a bullish position in FLS a year ago. With hedge funds’ sentiment swirling, there exists an “upper tier” of noteworthy hedge fund managers who were upping their stakes substantially (or already accumulated large positions). 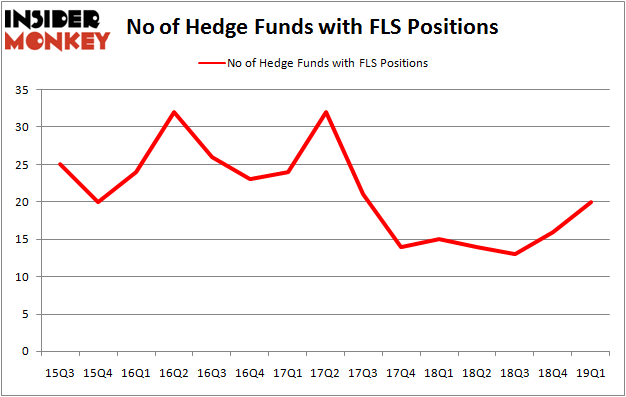 Among these funds, GAMCO Investors held the most valuable stake in Flowserve Corporation (NYSE:FLS), which was worth $116 million at the end of the first quarter. On the second spot was Impax Asset Management which amassed $42.1 million worth of shares. Moreover, Renaissance Technologies, Millennium Management, and Citadel Investment Group were also bullish on Flowserve Corporation (NYSE:FLS), allocating a large percentage of their portfolios to this stock.

Consequently, key money managers were leading the bulls’ herd. Renaissance Technologies, managed by Jim Simons, established the most outsized position in Flowserve Corporation (NYSE:FLS). Renaissance Technologies had $19.9 million invested in the company at the end of the quarter. Javier Velazquez’s Albar Capital also made a $7.4 million investment in the stock during the quarter. The following funds were also among the new FLS investors: Gregg Moskowitz’s Interval Partners, Andrew Feldstein and Stephen Siderow’s Blue Mountain Capital, and Brandon Haley’s Holocene Advisors.

Let’s now take a look at hedge fund activity in other stocks – not necessarily in the same industry as Flowserve Corporation (NYSE:FLS) but similarly valued. We will take a look at Catalent Inc (NYSE:CTLT), Cree, Inc. (NASDAQ:CREE), Sabre Corporation (NASDAQ:SABR), and Woodward Inc (NASDAQ:WWD). This group of stocks’ market caps are similar to FLS’s market cap.

As you can see these stocks had an average of 17.5 hedge funds with bullish positions and the average amount invested in these stocks was $191 million. That figure was $236 million in FLS’s case. Sabre Corporation (NASDAQ:SABR) is the most popular stock in this table. On the other hand Cree, Inc. (NASDAQ:CREE) is the least popular one with only 14 bullish hedge fund positions. Flowserve Corporation (NYSE:FLS) is not the most popular stock in this group but hedge fund interest is still above average. Our calculations showed that top 20 most popular stocks among hedge funds returned 1.9% in Q2 through May 30th and outperformed the S&P 500 ETF (SPY) by more than 3 percentage points. Hedge funds were also right about betting on FLS as the stock returned 5.3% during the same period and outperformed the market by an even larger margin. Hedge funds were rewarded for their relative bullishness.