Before we spend days researching a stock idea we’d like to take a look at how hedge funds and billionaire investors recently traded that stock. S&P 500 Index ETF (SPY) lost 2.6% in the first two months of the second quarter. Ten out of 11 industry groups in the S&P 500 Index lost value in May. The average return of a randomly picked stock in the index was even worse (-3.6%). This means you (or a monkey throwing a dart) have less than an even chance of beating the market by randomly picking a stock. On the other hand, the top 20 most popular S&P 500 stocks among hedge funds not only generated positive returns but also outperformed the index by about 3 percentage points through May 30th. In this article, we will take a look at what hedge funds think about Extraction Oil & Gas, Inc. (NASDAQ:XOG).

Extraction Oil & Gas, Inc. (NASDAQ:XOG) has experienced a decrease in enthusiasm from smart money of late. XOG was in 20 hedge funds’ portfolios at the end of the first quarter of 2019. There were 22 hedge funds in our database with XOG holdings at the end of the previous quarter. Our calculations also showed that xog isn’t among the 30 most popular stocks among hedge funds.

Today there are several formulas market participants can use to value their holdings. Some of the most under-the-radar formulas are hedge fund and insider trading moves. Our experts have shown that, historically, those who follow the best picks of the top investment managers can beat the S&P 500 by a solid margin (see the details here).

What does the smart money think about Extraction Oil & Gas, Inc. (NASDAQ:XOG)? 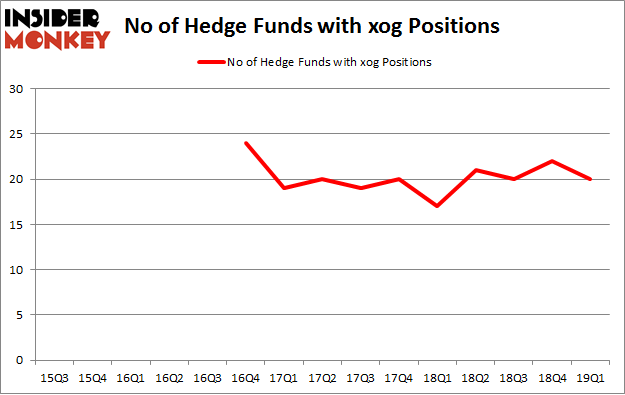 Of the funds tracked by Insider Monkey, Luminus Management, managed by Jonathan Barrett and Paul Segal, holds the biggest position in Extraction Oil & Gas, Inc. (NASDAQ:XOG). Luminus Management has a $47.4 million position in the stock, comprising 1% of its 13F portfolio. The second most bullish fund manager is Point72 Asset Management, led by Steve Cohen, holding a $21.5 million position; 0.1% of its 13F portfolio is allocated to the stock. Some other peers that are bullish comprise Paul Marshall and Ian Wace’s Marshall Wace LLP, Israel Englander’s Millennium Management and Carl Goldsmith and Scott Klein’s Beach Point Capital Management.

Seeing as Extraction Oil & Gas, Inc. (NASDAQ:XOG) has faced falling interest from the aggregate hedge fund industry, it’s easy to see that there exists a select few hedgies who sold off their positions entirely last quarter. It’s worth mentioning that Joshua Friedman and Mitchell Julis’s Canyon Capital Advisors dumped the biggest position of the 700 funds tracked by Insider Monkey, totaling an estimated $11.9 million in stock, and Lee Ainslie’s Maverick Capital was right behind this move, as the fund dumped about $5.6 million worth. These bearish behaviors are interesting, as aggregate hedge fund interest fell by 2 funds last quarter.

As you can see these stocks had an average of 11.25 hedge funds with bullish positions and the average amount invested in these stocks was $102 million. That figure was $130 million in XOG’s case. Resolute Forest Products Inc (NYSE:RFP) is the most popular stock in this table. On the other hand Opera Limited (NASDAQ:OPRA) is the least popular one with only 5 bullish hedge fund positions. Extraction Oil & Gas, Inc. (NASDAQ:XOG) is not the most popular stock in this group but hedge fund interest is still above average. This is a slightly positive signal but we’d rather spend our time researching stocks that hedge funds are piling on. Our calculations showed that top 20 most popular stocks among hedge funds returned 1.9% in Q2 through May 30th and outperformed the S&P 500 ETF (SPY) by more than 3 percentage points. Unfortunately XOG wasn’t nearly as popular as these 20 stocks and hedge funds that were betting on XOG were disappointed as the stock returned -18.4% during the same period and underperformed the market. If you are interested in investing in large cap stocks with huge upside potential, you should check out the top 20 most popular stocks among hedge funds as 13 of these stocks already outperformed the market so far in Q2.