Essent Group Ltd (NYSE:ESNT) was in 27 hedge funds’ portfolios at the end of March. ESNT investors should pay attention to a decrease in hedge fund interest of late. There were 28 hedge funds in our database with ESNT holdings at the end of the previous quarter. Our calculations also showed that esnt isn’t among the 30 most popular stocks among hedge funds.

What does the smart money think about Essent Group Ltd (NYSE:ESNT)? 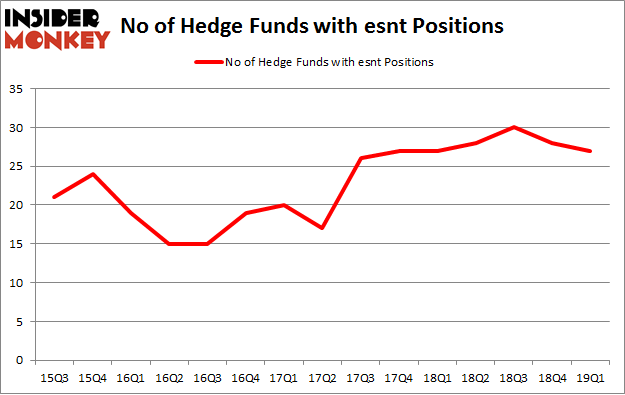 More specifically, Polar Capital was the largest shareholder of Essent Group Ltd (NYSE:ESNT), with a stake worth $71.7 million reported as of the end of March. Trailing Polar Capital was GLG Partners, which amassed a stake valued at $66.1 million. Renaissance Technologies, Millennium Management, and D E Shaw were also very fond of the stock, giving the stock large weights in their portfolios.

Due to the fact that Essent Group Ltd (NYSE:ESNT) has faced falling interest from the smart money, logic holds that there were a few money managers who were dropping their positions entirely heading into Q3. Intriguingly, Anand Parekh’s Alyeska Investment Group cut the largest stake of all the hedgies followed by Insider Monkey, comprising about $11.4 million in stock. Michael Hintze’s fund, CQS Cayman LP, also sold off its stock, about $2.9 million worth. These transactions are intriguing to say the least, as aggregate hedge fund interest was cut by 1 funds heading into Q3.

As you can see these stocks had an average of 16.25 hedge funds with bullish positions and the average amount invested in these stocks was $209 million. That figure was $310 million in ESNT’s case. SINA Corp (NASDAQ:SINA) is the most popular stock in this table. On the other hand Amneal Pharmaceuticals, Inc. (NYSE:AMRX) is the least popular one with only 8 bullish hedge fund positions. Compared to these stocks Essent Group Ltd (NYSE:ESNT) is more popular among hedge funds. Our calculations showed that top 20 most popular stocks among hedge funds returned 1.9% in Q2 through May 30th and outperformed the S&P 500 ETF (SPY) by more than 3 percentage points. Hedge funds were also right about betting on ESNT as the stock returned 9.3% during the same period and outperformed the market by an even larger margin. Hedge funds were clearly right about piling into this stock relative to other stocks with similar market capitalizations.