The 700+ hedge funds and famous money managers tracked by Insider Monkey have already compiled and submitted their 13F filings for the first quarter, which unveil their equity positions as of March 31. We went through these filings, fixed typos and other more significant errors and identified the changes in hedge fund portfolios. Our extensive review of these public filings is finally over, so this article is set to reveal the smart money sentiment towards Entegris Inc (NASDAQ:ENTG).

Entegris Inc (NASDAQ:ENTG) was in 22 hedge funds’ portfolios at the end of March. ENTG investors should pay attention to an increase in enthusiasm from smart money recently. There were 18 hedge funds in our database with ENTG holdings at the end of the previous quarter. Our calculations also showed that ENTG isn’t among the 30 most popular stocks among hedge funds.

We’re going to take a peek at the recent hedge fund action regarding Entegris Inc (NASDAQ:ENTG).

At Q1’s end, a total of 22 of the hedge funds tracked by Insider Monkey were long this stock, a change of 22% from the previous quarter. The graph below displays the number of hedge funds with bullish position in ENTG over the last 15 quarters. With hedgies’ sentiment swirling, there exists a select group of key hedge fund managers who were adding to their stakes meaningfully (or already accumulated large positions). 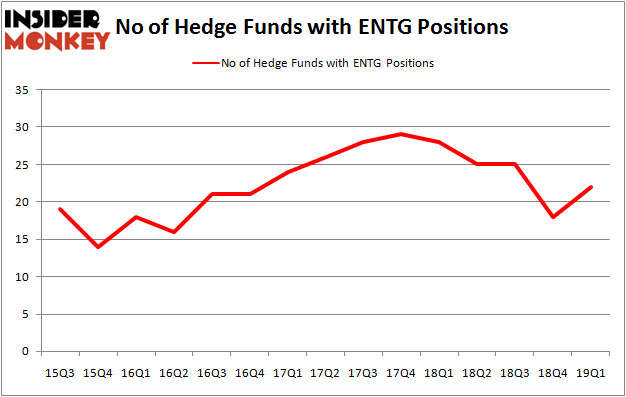 Among these funds, GMT Capital held the most valuable stake in Entegris Inc (NASDAQ:ENTG), which was worth $281.5 million at the end of the first quarter. On the second spot was RGM Capital which amassed $65.7 million worth of shares. Moreover, Daruma Asset Management, Polar Capital, and Royce & Associates were also bullish on Entegris Inc (NASDAQ:ENTG), allocating a large percentage of their portfolios to this stock.

As aggregate interest increased, specific money managers were leading the bulls’ herd. Polar Capital, managed by Brian Ashford-Russell and Tim Woolley, initiated the most outsized position in Entegris Inc (NASDAQ:ENTG). Polar Capital had $29.5 million invested in the company at the end of the quarter. Paul Marshall and Ian Wace’s Marshall Wace LLP also made a $9.8 million investment in the stock during the quarter. The following funds were also among the new ENTG investors: Dmitry Balyasny’s Balyasny Asset Management, Paul Tudor Jones’s Tudor Investment Corp, and Matthew Tewksbury’s Stevens Capital Management.

As you can see these stocks had an average of 19.5 hedge funds with bullish positions and the average amount invested in these stocks was $356 million. That figure was $471 million in ENTG’s case. Nuance Communications Inc. (NASDAQ:NUAN) is the most popular stock in this table. On the other hand Prosperity Bancshares, Inc. (NYSE:PB) is the least popular one with only 9 bullish hedge fund positions. Entegris Inc (NASDAQ:ENTG) is not the most popular stock in this group but hedge fund interest is still above average. This is a slightly positive signal but we’d rather spend our time researching stocks that hedge funds are piling on. Our calculations showed that top 20 most popular stocks among hedge funds returned 1.9% in Q2 through May 30th and outperformed the S&P 500 ETF (SPY) by more than 3 percentage points. Unfortunately ENTG wasn’t nearly as popular as these 20 stocks and hedge funds that were betting on ENTG were disappointed as the stock returned -3.2% during the same period and underperformed the market. If you are interested in investing in large cap stocks with huge upside potential, you should check out the top 20 most popular stocks among hedge funds as 13 of these stocks already outperformed the market so far in Q2.