Is Eagle Bulk Shipping Inc. (NASDAQ:EGLE) a good stock to buy right now? We at Insider Monkey like to examine what billionaires and hedge funds think of a company before doing days of research on it. Given their 2 and 20 payment structure, hedge funds have more incentives and resources than the average investor. The funds have access to expert networks and get tips from industry insiders. They also have numerous Ivy League graduates and MBAs. Like everyone else, hedge funds perform miserably at times, but their consensus picks have historically outperformed the market after risk adjustments.

Eagle Bulk Shipping Inc. (NASDAQ:EGLE) shares haven’t seen a lot of action during the first quarter. Overall, hedge fund sentiment was unchanged. The stock was in 10 hedge funds’ portfolios at the end of March. At the end of this article we will also compare EGLE to other stocks including Farmer Bros. Co. (NASDAQ:FARM), Summit Financial Group, Inc. (NASDAQ:SMMF), and ChannelAdvisor Corp (NYSE:ECOM) to get a better sense of its popularity.

How have hedgies been trading Eagle Bulk Shipping Inc. (NASDAQ:EGLE)?

At Q1’s end, a total of 10 of the hedge funds tracked by Insider Monkey were long this stock, a change of 0% from the previous quarter. The graph below displays the number of hedge funds with bullish position in EGLE over the last 15 quarters. With the smart money’s sentiment swirling, there exists a select group of notable hedge fund managers who were upping their stakes meaningfully (or already accumulated large positions). 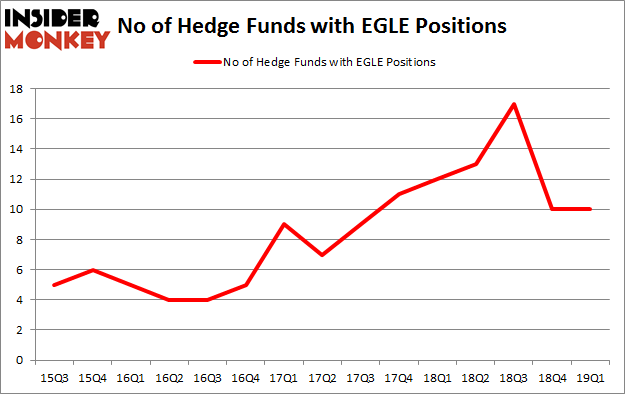 More specifically, Oaktree Capital Management was the largest shareholder of Eagle Bulk Shipping Inc. (NASDAQ:EGLE), with a stake worth $122.1 million reported as of the end of March. Trailing Oaktree Capital Management was GoldenTree Asset Management, which amassed a stake valued at $65.5 million. Royce & Associates, Renaissance Technologies, and Two Sigma Advisors were also very fond of the stock, giving the stock large weights in their portfolios.

Due to the fact that Eagle Bulk Shipping Inc. (NASDAQ:EGLE) has faced bearish sentiment from the entirety of the hedge funds we track, it’s safe to say that there were a few funds that decided to sell off their positions entirely last quarter. At the top of the heap, Daniel Gold’s QVT Financial dropped the biggest stake of the 700 funds monitored by Insider Monkey, worth an estimated $0.5 million in stock. Jeffrey Talpins’s fund, Element Capital Management, also said goodbye to its stock, about $0.2 million worth. These bearish behaviors are intriguing to say the least, as total hedge fund interest stayed the same (this is a bearish signal in our experience).

As you can see these stocks had an average of 10 hedge funds with bullish positions and the average amount invested in these stocks was $47 million. That figure was $205 million in EGLE’s case. Exantas Capital Corp. (NYSE:XAN) is the most popular stock in this table. On the other hand Summit Financial Group, Inc. (NASDAQ:SMMF) is the least popular one with only 2 bullish hedge fund positions. Eagle Bulk Shipping Inc. (NASDAQ:EGLE) is not the least popular stock in this group but hedge fund interest is still below average. Our calculations showed that top 20 most popular stocks among hedge funds returned 6.2% in Q2 through June 19th and outperformed the S&P 500 ETF (SPY) by nearly 3 percentage points. A small number of hedge funds were also right about betting on EGLE, though not to the same extent, as the stock returned 4.7% during the same time frame and outperformed the market as well.