A whopping number of 13F filings filed with U.S. Securities and Exchange Commission has been processed by Insider Monkey so that individual investors can look at the overall hedge fund sentiment towards the stocks included in their watchlists. These freshly-submitted public filings disclose money managers’ equity positions as of the end of the three-month period that ended March 31, so let’s proceed with the discussion of the hedge fund sentiment on Domtar Corporation (NYSE:UFS).

Is Domtar Corporation (NYSE:UFS) worth your attention right now? The best stock pickers are turning less bullish. The number of bullish hedge fund positions dropped by 6 in recent months. Our calculations also showed that ufs isn’t among the 30 most popular stocks among hedge funds. UFS was in 19 hedge funds’ portfolios at the end of the first quarter of 2019. There were 25 hedge funds in our database with UFS positions at the end of the previous quarter.

At Q1’s end, a total of 19 of the hedge funds tracked by Insider Monkey were bullish on this stock, a change of -24% from the fourth quarter of 2018. Below, you can check out the change in hedge fund sentiment towards UFS over the last 15 quarters. With hedge funds’ sentiment swirling, there exists a few key hedge fund managers who were upping their holdings meaningfully (or already accumulated large positions). 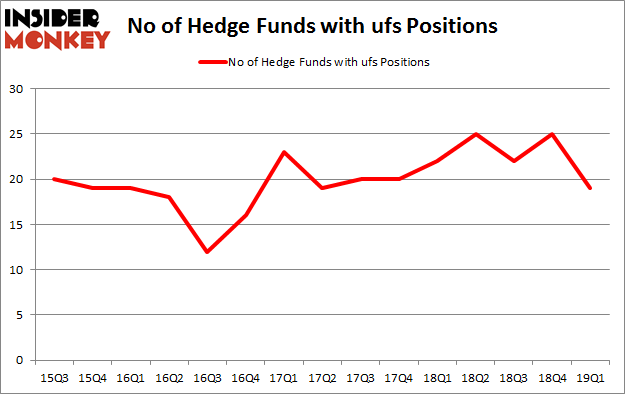 Among these funds, Citadel Investment Group held the most valuable stake in Domtar Corporation (NYSE:UFS), which was worth $66.6 million at the end of the first quarter. On the second spot was Millennium Management which amassed $23.9 million worth of shares. Moreover, GLG Partners, Renaissance Technologies, and Two Sigma Advisors were also bullish on Domtar Corporation (NYSE:UFS), allocating a large percentage of their portfolios to this stock.

Because Domtar Corporation (NYSE:UFS) has witnessed a decline in interest from the aggregate hedge fund industry, it’s easy to see that there exists a select few fund managers who were dropping their full holdings in the third quarter. It’s worth mentioning that Clint Carlson’s Carlson Capital dumped the biggest stake of all the hedgies tracked by Insider Monkey, valued at an estimated $1.8 million in call options, and Sander Gerber’s Hudson Bay Capital Management was right behind this move, as the fund cut about $0.9 million worth. These bearish behaviors are interesting, as total hedge fund interest fell by 6 funds in the third quarter.