How do we determine whether Cutera, Inc. (NASDAQ:CUTR) makes for a good investment at the moment? We analyze the sentiment of a select group of the very best investors in the world, who spend immense amounts of time and resources studying companies. They may not always be right (no one is), but data shows that their consensus long positions have historically outperformed the market when we adjust for known risk factors.

Is Cutera, Inc. (NASDAQ:CUTR) a good investment today? Hedge funds are becoming less hopeful. The number of long hedge fund positions were trimmed by 3 recently. Our calculations also showed that CUTR isn’t among the 30 most popular stocks among hedge funds.

In the financial world there are tons of methods shareholders can use to grade stocks. A pair of the most under-the-radar methods are hedge fund and insider trading sentiment. We have shown that, historically, those who follow the best picks of the best fund managers can beat the market by a significant margin (see the details here).

What does smart money think about Cutera, Inc. (NASDAQ:CUTR)? 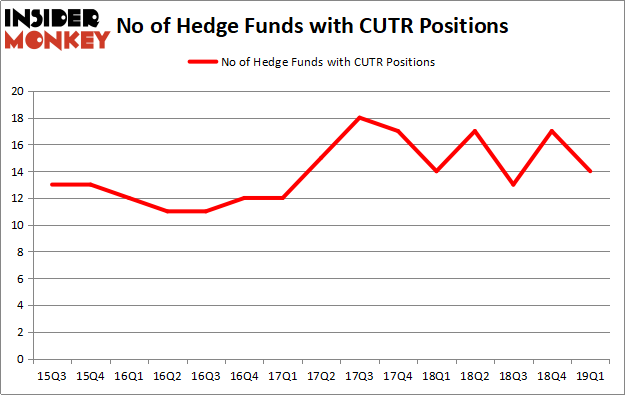 Among these funds, GAMCO Investors held the most valuable stake in Cutera, Inc. (NASDAQ:CUTR), which was worth $19.4 million at the end of the first quarter. On the second spot was Renaissance Technologies which amassed $10.7 million worth of shares. Moreover, Archon Capital Management, Voce Capital, and AQR Capital Management were also bullish on Cutera, Inc. (NASDAQ:CUTR), allocating a large percentage of their portfolios to this stock.

Because Cutera, Inc. (NASDAQ:CUTR) has witnessed declining sentiment from the entirety of the hedge funds we track, it’s safe to say that there were a few hedge funds who sold off their positions entirely by the end of the third quarter. At the top of the heap, Noam Gottesman’s GLG Partners said goodbye to the largest stake of all the hedgies watched by Insider Monkey, valued at about $0.8 million in stock, and Josh Goldberg’s G2 Investment Partners Management was right behind this move, as the fund dumped about $0.8 million worth. These bearish behaviors are intriguing to say the least, as total hedge fund interest fell by 3 funds by the end of the third quarter.

As you can see these stocks had an average of 7 hedge funds with bullish positions and the average amount invested in these stocks was $38 million. That figure was $55 million in CUTR’s case. Aclaris Therapeutics, Inc. (NASDAQ:ACRS) is the most popular stock in this table. On the other hand Willis Lease Finance Corporation (NASDAQ:WLFC) is the least popular one with only 2 bullish hedge fund positions. Cutera, Inc. (NASDAQ:CUTR) is not the most popular stock in this group but hedge fund interest is still above average. Our calculations showed that top 20 most popular stocks among hedge funds returned 6.2% in Q2 through June 19th and outperformed the S&P 500 ETF (SPY) by nearly 3 percentage points. Hedge funds were also right about betting on CUTR as the stock returned 13.9% during the same period and outperformed the market by an even larger margin. Hedge funds were rewarded for their relative bullishness.