We know that hedge funds generate strong, risk-adjusted returns over the long run, therefore imitating the picks that they are collectively bullish on can be a profitable strategy for retail investors. With billions of dollars in assets, smart money investors have to conduct complex analyses, spend many resources and use tools that are not always available for the general crowd. This doesn’t mean that they don’t have occasional colossal losses; they do (like Peltz’s recent General Electric losses). However, it is still a good idea to keep an eye on hedge fund activity. With this in mind, as the current round of 13F filings has just ended, let’s examine the smart money sentiment towards Corning Incorporated (NYSE:GLW).

Corning Incorporated (NYSE:GLW) shareholders have witnessed an increase in activity from the world’s largest hedge funds recently. GLW was in 37 hedge funds’ portfolios at the end of the first quarter of 2019. There were 30 hedge funds in our database with GLW holdings at the end of the previous quarter. Our calculations also showed that glw isn’t among the 30 most popular stocks among hedge funds. 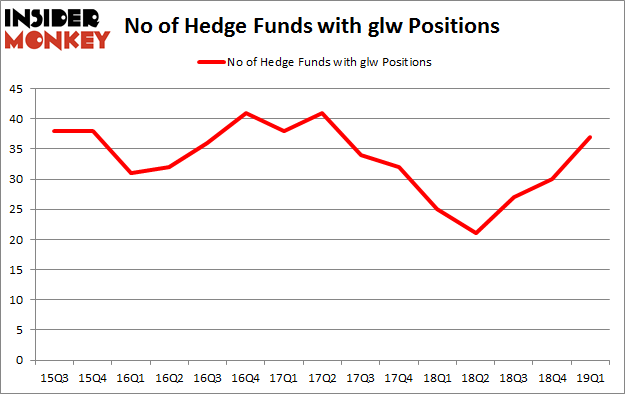 More specifically, Two Sigma Advisors was the largest shareholder of Corning Incorporated (NYSE:GLW), with a stake worth $89.9 million reported as of the end of March. Trailing Two Sigma Advisors was Arrowstreet Capital, which amassed a stake valued at $83 million. Millennium Management, Renaissance Technologies, and Adage Capital Management were also very fond of the stock, giving the stock large weights in their portfolios.

As one would reasonably expect, key money managers were breaking ground themselves. Renaissance Technologies, managed by Jim Simons, created the most outsized position in Corning Incorporated (NYSE:GLW). Renaissance Technologies had $66.5 million invested in the company at the end of the quarter. D. E. Shaw’s D E Shaw also initiated a $12.2 million position during the quarter. The other funds with brand new GLW positions are David Costen Haley’s HBK Investments, Doug Gordon, Jon Hilsabeck and Don Jabro’s Shellback Capital, and Nick Thakore’s Diametric Capital.

As you can see these stocks had an average of 43.75 hedge funds with bullish positions and the average amount invested in these stocks was $1624 million. That figure was $623 million in GLW’s case. Pioneer Natural Resources Company (NYSE:PXD) is the most popular stock in this table. On the other hand Republic Services, Inc. (NYSE:RSG) is the least popular one with only 30 bullish hedge fund positions. Corning Incorporated (NYSE:GLW) is not the least popular stock in this group but hedge fund interest is still below average. This is a slightly negative signal and we’d rather spend our time researching stocks that hedge funds are piling on. Our calculations showed that top 20 most popular stocks among hedge funds returned 1.9% in Q2 through May 30th and outperformed the S&P 500 ETF (SPY) by more than 3 percentage points. Unfortunately GLW wasn’t nearly as popular as these 20 stocks (hedge fund sentiment was quite bearish); GLW investors were disappointed as the stock returned -11.2% during the same time period and underperformed the market. If you are interested in investing in large cap stocks with huge upside potential, you should check out the top 20 most popular stocks among hedge funds as 13 of these stocks already outperformed the market so far in Q2.

Is ACADIA Pharmaceuticals Inc. (ACAD) A Good Stock To Buy?
Monthly Newsletter Strategy
Download a free copy of our newsletter and see the details inside!
Hedge Fund Resource Center
Related News
Here’s What Hedge Funds Think About Corning Incorporated (GLW) Is Corning Incorporated (GLW) A Good Stock To Buy? Analysts Chime in on Corning, Quest Diagnostics, Canadian Pacific, Norfolk Southern, and More Is Corning Incorporated (GLW) the Right Stock for Your Portfolio? ValueWorks’ Top Pick From Each of 5 Prominent Sectors: Gilead (GILD), Boeing (BA), More Why Apple, Microsoft, Corning, Ariad, and More Are in the Spotlight Can Anything Slow Down These Five Stocks? 21 Best Tinder Bio Examples for Newly Single Moms 17 Best Excuses to Get Out of Work 25 Best Bumble Bios For Girls
Billionaire Hedge Funds