The market has been volatile in the last 6 months as the Federal Reserve continued its rate hikes and then abruptly reversed its stance and uncertainty looms over trade negotiations with China. Small cap stocks have been hit hard as a result, as the Russell 2000 ETF (IWM) has underperformed the larger S&P 500 ETF (SPY) by nearly 9 percentage points. SEC filings and hedge fund investor letters indicate that the smart money seems to be paring back their overall long exposure since summer months, though some funds increased their exposure dramatically at the end of Q4 and the beginning of Q1. In this article, we analyze what the smart money thinks of ConocoPhillips (NYSE:COP) and find out how it is affected by hedge funds’ moves.

Is ConocoPhillips (NYSE:COP) a bargain? The smart money is turning less bullish. The number of long hedge fund positions dropped by 5 lately. Our calculations also showed that COP isn’t among the 30 most popular stocks among hedge funds.

In the eyes of most market participants, hedge funds are assumed to be worthless, old financial tools of years past. While there are more than 8000 funds trading at present, We look at the leaders of this group, about 750 funds. Most estimates calculate that this group of people have their hands on the lion’s share of all hedge funds’ total capital, and by tracking their unrivaled picks, Insider Monkey has determined several investment strategies that have historically outstripped the S&P 500 index. Insider Monkey’s flagship hedge fund strategy outperformed the S&P 500 index by around 5 percentage points per year since its inception in May 2014 through the end of May. We were able to generate large returns even by identifying short candidates. Our portfolio of short stocks lost 30.9% since February 2017 (through May 30th) even though the market was up nearly 24% during the same period. We just shared a list of 5 short targets in our latest quarterly update and they are already down an average of 11.9% in less than a couple of weeks whereas our long picks outperformed the market by 2 percentage points in this volatile 2 week period.

At the end of the first quarter, a total of 54 of the hedge funds tracked by Insider Monkey held long positions in this stock, a change of -8% from one quarter earlier. By comparison, 41 hedge funds held shares or bullish call options in COP a year ago. With the smart money’s sentiment swirling, there exists an “upper tier” of notable hedge fund managers who were increasing their stakes meaningfully (or already accumulated large positions). 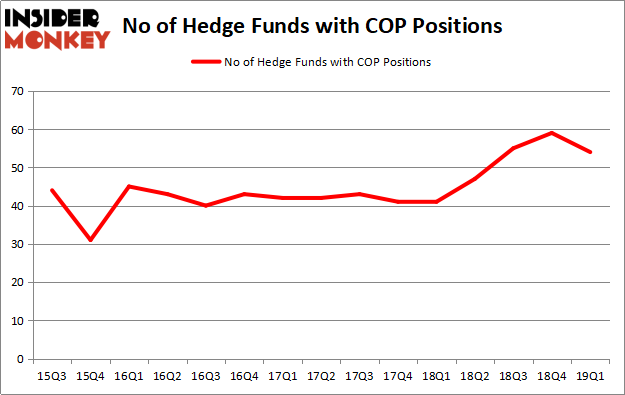 Among these funds, AQR Capital Management held the most valuable stake in ConocoPhillips (NYSE:COP), which was worth $492 million at the end of the first quarter. On the second spot was D E Shaw which amassed $403.2 million worth of shares. Moreover, Millennium Management, Renaissance Technologies, and Arrowstreet Capital were also bullish on ConocoPhillips (NYSE:COP), allocating a large percentage of their portfolios to this stock.

Seeing as ConocoPhillips (NYSE:COP) has experienced declining sentiment from the aggregate hedge fund industry, logic holds that there were a few funds that slashed their full holdings by the end of the third quarter. Intriguingly, Ryan Caldwell’s Chiron Investment Management sold off the largest investment of all the hedgies followed by Insider Monkey, worth about $33.6 million in stock. Anand Parekh’s fund, Alyeska Investment Group, also said goodbye to its stock, about $26.6 million worth. These transactions are important to note, as total hedge fund interest fell by 5 funds by the end of the third quarter.

As you can see these stocks had an average of 40.5 hedge funds with bullish positions and the average amount invested in these stocks was $2308 million. That figure was $2719 million in COP’s case. Anthem Inc (NYSE:ANTM) is the most popular stock in this table. On the other hand Banco Santander, S.A. (NYSE:SAN) is the least popular one with only 23 bullish hedge fund positions. ConocoPhillips (NYSE:COP) is not the most popular stock in this group but hedge fund interest is still above average. This is a slightly positive signal but we’d rather spend our time researching stocks that hedge funds are piling on. Our calculations showed that top 20 most popular stocks among hedge funds returned 1.9% in Q2 through May 30th and outperformed the S&P 500 ETF (SPY) by more than 3 percentage points. Unfortunately COP wasn’t nearly as popular as these 20 stocks and hedge funds that were betting on COP were disappointed as the stock returned -11.2% during the same period and underperformed the market. If you are interested in investing in large cap stocks with huge upside potential, you should check out the top 20 most popular stocks among hedge funds as 13 of these stocks already outperformed the market so far in Q2.