Like everyone else, elite investors make mistakes. Some of their top consensus picks, such as Amazon, Facebook and Alibaba, have not done well in Q4 due to various reasons. Nevertheless, the data show elite investors’ consensus picks have done well on average over the long-term. The top 20 stocks among hedge funds beat the S&P 500 Index ETF by more than 6 percentage points so far this year. Because their consensus picks have done well, we pay attention to what elite funds think before doing extensive research on a stock. In this article, we take a closer look at Commercial Metals Company (NYSE:CMC) from the perspective of those elite funds.

Commercial Metals Company (NYSE:CMC) shareholders have witnessed a decrease in support from the world’s most elite money managers recently. CMC was in 11 hedge funds’ portfolios at the end of March. There were 17 hedge funds in our database with CMC holdings at the end of the previous quarter. Our calculations also showed that cmc isn’t among the 30 most popular stocks among hedge funds.

What have hedge funds been doing with Commercial Metals Company (NYSE:CMC)?

At the end of the first quarter, a total of 11 of the hedge funds tracked by Insider Monkey held long positions in this stock, a change of -35% from the fourth quarter of 2018. By comparison, 18 hedge funds held shares or bullish call options in CMC a year ago. With the smart money’s sentiment swirling, there exists a select group of noteworthy hedge fund managers who were adding to their holdings significantly (or already accumulated large positions). 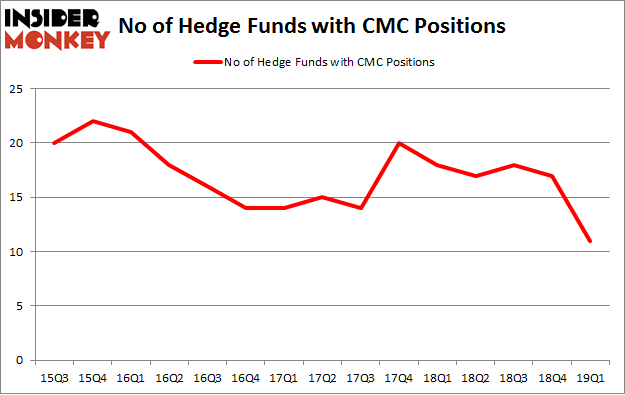 Among these funds, Luminus Management held the most valuable stake in Commercial Metals Company (NYSE:CMC), which was worth $98.6 million at the end of the first quarter. On the second spot was Citadel Investment Group which amassed $70.4 million worth of shares. Moreover, Highline Capital Management, Royce & Associates, and GLG Partners were also bullish on Commercial Metals Company (NYSE:CMC), allocating a large percentage of their portfolios to this stock.

Because Commercial Metals Company (NYSE:CMC) has witnessed falling interest from the aggregate hedge fund industry, it’s safe to say that there was a specific group of fund managers that elected to cut their positions entirely in the third quarter. It’s worth mentioning that Cliff Asness’s AQR Capital Management said goodbye to the biggest investment of all the hedgies watched by Insider Monkey, valued at an estimated $9.7 million in stock. Dmitry Balyasny’s fund, Balyasny Asset Management, also dropped its stock, about $4.7 million worth. These bearish behaviors are intriguing to say the least, as total hedge fund interest dropped by 6 funds in the third quarter.

As you can see these stocks had an average of 17.25 hedge funds with bullish positions and the average amount invested in these stocks was $169 million. That figure was $275 million in CMC’s case. Gray Television, Inc. (NYSE:GTN) is the most popular stock in this table. On the other hand Colony Credit Real Estate, Inc. (NYSE:CLNC) is the least popular one with only 6 bullish hedge fund positions. Commercial Metals Company (NYSE:CMC) is not the least popular stock in this group but hedge fund interest is still below average. This is a slightly negative signal and we’d rather spend our time researching stocks that hedge funds are piling on. Our calculations showed that top 20 most popular stocks among hedge funds returned 6.2% in Q2 through June 19th and outperformed the S&P 500 ETF (SPY) by nearly 3 percentage points. Unfortunately CMC wasn’t nearly as popular as these 20 stocks (hedge fund sentiment was quite bearish); CMC investors were disappointed as the stock returned -6.4% during the same time period and underperformed the market. If you are interested in investing in large cap stocks with huge upside potential, you should check out the top 20 most popular stocks among hedge funds as 13 of these stocks already outperformed the market so far in Q2.