Is Colgate-Palmolive Company (NYSE:CL) a good place to invest some of your money right now? We can gain invaluable insight to help us answer that question by studying the investment trends of top investors, who employ world-class Ivy League graduates, who are given immense resources and industry contacts to put their financial expertise to work. The top picks of these firms have historically outperformed the market when we account for known risk factors, making them very valuable investment ideas.

Is Colgate-Palmolive Company (NYSE:CL) worth your attention right now? Money managers are taking a pessimistic view. The number of long hedge fund bets retreated by 3 lately. Our calculations also showed that cl isn’t among the 30 most popular stocks among hedge funds. CL was in 42 hedge funds’ portfolios at the end of March. There were 45 hedge funds in our database with CL holdings at the end of the previous quarter.

What have hedge funds been doing with Colgate-Palmolive Company (NYSE:CL)? 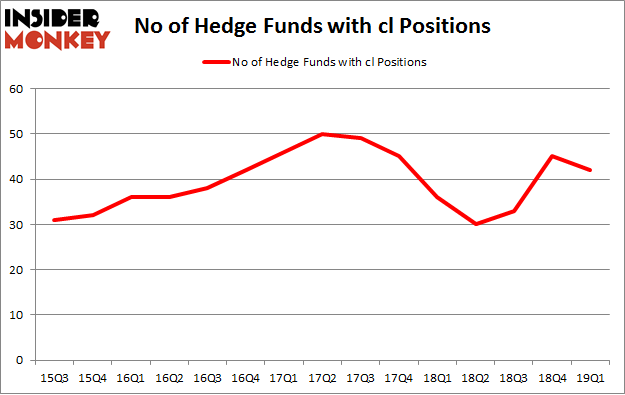 Among these funds, D E Shaw held the most valuable stake in Colgate-Palmolive Company (NYSE:CL), which was worth $539.9 million at the end of the first quarter. On the second spot was Renaissance Technologies which amassed $360 million worth of shares. Moreover, Two Sigma Advisors, AQR Capital Management, and Alkeon Capital Management were also bullish on Colgate-Palmolive Company (NYSE:CL), allocating a large percentage of their portfolios to this stock.

Seeing as Colgate-Palmolive Company (NYSE:CL) has faced declining sentiment from the entirety of the hedge funds we track, it’s easy to see that there lies a certain “tier” of hedge funds that elected to cut their positions entirely heading into Q3. Interestingly, Alex Snow’s Lansdowne Partners sold off the largest stake of the 700 funds watched by Insider Monkey, valued at an estimated $238.3 million in stock, and Steve Cohen’s Point72 Asset Management was right behind this move, as the fund cut about $76.4 million worth. These moves are intriguing to say the least, as aggregate hedge fund interest dropped by 3 funds heading into Q3.

As you can see these stocks had an average of 41.25 hedge funds with bullish positions and the average amount invested in these stocks was $1825 million. That figure was $1908 million in CL’s case. T-Mobile US, Inc. (NASDAQ:TMUS) is the most popular stock in this table. On the other hand Lloyds Banking Group PLC (NYSE:LYG) is the least popular one with only 8 bullish hedge fund positions. Colgate-Palmolive Company (NYSE:CL) is not the most popular stock in this group but hedge fund interest is still above average. Our calculations showed that top 20 most popular stocks among hedge funds returned 1.9% in Q2 through May 30th and outperformed the S&P 500 ETF (SPY) by more than 3 percentage points. Hedge funds were also right about betting on CL as the stock returned 4% during the same period and outperformed the market by an even larger margin. Hedge funds were rewarded for their relative bullishness.