Before we spend days researching a stock idea we’d like to take a look at how hedge funds and billionaire investors recently traded that stock. S&P 500 Index ETF (SPY) lost 2.6% in the first two months of the second quarter. Ten out of 11 industry groups in the S&P 500 Index lost value in May. The average return of a randomly picked stock in the index was even worse (-3.6%). This means you (or a monkey throwing a dart) have less than an even chance of beating the market by randomly picking a stock. On the other hand, the top 20 most popular S&P 500 stocks among hedge funds not only generated positive returns but also outperformed the index by about 3 percentage points through May 30th. In this article, we will take a look at what hedge funds think about Colfax Corporation (NYSE:CFX).

Colfax Corporation (NYSE:CFX) has experienced an increase in enthusiasm from smart money recently. Our calculations also showed that CFX isn’t among the 30 most popular stocks among hedge funds.

What does the smart money think about Colfax Corporation (NYSE:CFX)? 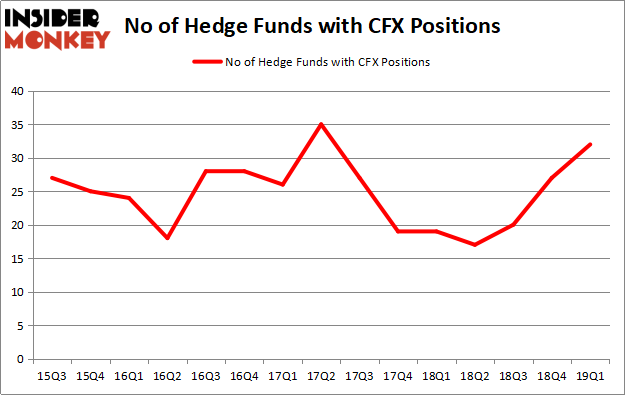 According to Insider Monkey’s hedge fund database, Select Equity Group, managed by Robert Joseph Caruso, holds the largest position in Colfax Corporation (NYSE:CFX). Select Equity Group has a $76.2 million position in the stock, comprising 0.5% of its 13F portfolio. The second most bullish fund manager is Charles Davidson and Joseph Jacobs of Wexford Capital, with a $62.5 million position; 5.2% of its 13F portfolio is allocated to the company. Other members of the smart money that hold long positions encompass Ric Dillon’s Diamond Hill Capital, Dan Loeb’s Third Point and Chuck Royce’s Royce & Associates.

With a general bullishness amongst the heavyweights, some big names have been driving this bullishness. Third Point, managed by Dan Loeb, established the most valuable position in Colfax Corporation (NYSE:CFX). Third Point had $59.4 million invested in the company at the end of the quarter. Michael Platt and William Reeves’s BlueCrest Capital Mgmt. also made a $48.9 million investment in the stock during the quarter. The following funds were also among the new CFX investors: D. E. Shaw’s D E Shaw, David Rosen’s Rubric Capital Management, and Jeff Lignelli’s Incline Global Management.