Insider Monkey has processed numerous 13F filings of hedge funds and successful investors to create an extensive database of hedge fund holdings. The 13F filings show the hedge funds’ and successful investors’ positions as of the end of the first quarter. You can find write-ups about an individual hedge fund’s trades on numerous financial news websites. However, in this article we will take a look at their collective moves and analyze what the smart money thinks of Clean Energy Fuels Corp (NASDAQ:CLNE) based on that data.

Is Clean Energy Fuels Corp (NASDAQ:CLNE) ready to rally soon? Hedge funds are getting more bullish. The number of bullish hedge fund positions improved by 3 in recent months. Our calculations also showed that clne isn’t among the 30 most popular stocks among hedge funds. CLNE was in 11 hedge funds’ portfolios at the end of March. There were 8 hedge funds in our database with CLNE positions at the end of the previous quarter.

What have hedge funds been doing with Clean Energy Fuels Corp (NASDAQ:CLNE)? 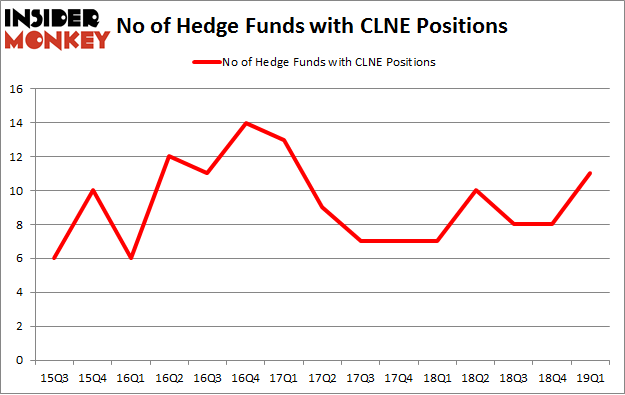 Now, key money managers were breaking ground themselves. BlueCrest Capital Mgmt., managed by Michael Platt and William Reeves, established the most outsized position in Clean Energy Fuels Corp (NASDAQ:CLNE). BlueCrest Capital Mgmt. had $0.2 million invested in the company at the end of the quarter. David Harding’s Winton Capital Management also made a $0.1 million investment in the stock during the quarter. The following funds were also among the new CLNE investors: Andrew Weiss’s Weiss Asset Management and Jeffrey Talpins’s Element Capital Management.

As you can see these stocks had an average of 6.5 hedge funds with bullish positions and the average amount invested in these stocks was $46 million. That figure was $32 million in CLNE’s case. i3 Verticals, Inc. (NASDAQ:IIIV) is the most popular stock in this table. On the other hand Crossamerica Partners LP (NYSE:CAPL) is the least popular one with only 4 bullish hedge fund positions. Compared to these stocks Clean Energy Fuels Corp (NASDAQ:CLNE) is more popular among hedge funds. Our calculations showed that top 20 most popular stocks among hedge funds returned 6.2% in Q2 through June 19th and outperformed the S&P 500 ETF (SPY) by nearly 3 percentage points. Unfortunately CLNE wasn’t nearly as popular as these 20 stocks and hedge funds that were betting on CLNE were disappointed as the stock returned -15.5% during the same period and underperformed the market. If you are interested in investing in large cap stocks with huge upside potential, you should check out the top 20 most popular stocks among hedge funds as 13 of these stocks already outperformed the market in Q2.