Is Cimarex Energy Co (NYSE:XEC) a good equity to bet on right now? We like to check what the smart money thinks first before doing extensive research. Although there have been several high profile failed hedge fund picks, the consensus picks among hedge fund investors have historically outperformed the market after adjusting for known risk attributes. It’s not surprising given that hedge funds have access to better information and more resources to predict the winners in the stock market.

Cimarex Energy Co (NYSE:XEC) investors should be aware of an increase in hedge fund sentiment recently. Our calculations also showed that XEC isn’t among the 30 most popular stocks among hedge funds.

Heading into the second quarter of 2019, a total of 30 of the hedge funds tracked by Insider Monkey were bullish on this stock, a change of 7% from the fourth quarter of 2018. On the other hand, there were a total of 34 hedge funds with a bullish position in XEC a year ago. With hedge funds’ sentiment swirling, there exists a few noteworthy hedge fund managers who were boosting their stakes significantly (or already accumulated large positions). 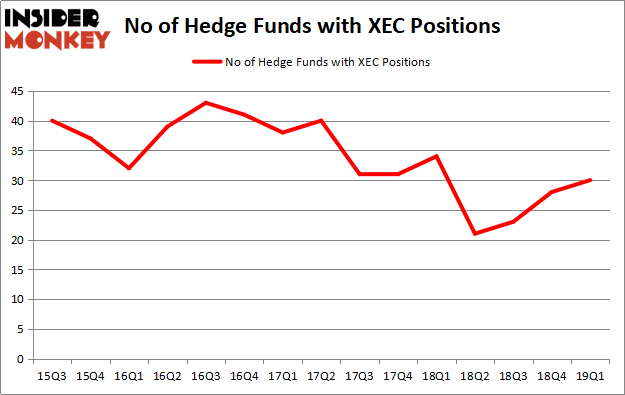 With a general bullishness amongst the heavyweights, key hedge funds were leading the bulls’ herd. Monarch Alternative Capital, managed by Michael Weinstock, created the largest position in Cimarex Energy Co (NYSE:XEC). Monarch Alternative Capital had $25.7 million invested in the company at the end of the quarter. Vince Maddi and Shawn Brennan’s SIR Capital Management also made a $3.5 million investment in the stock during the quarter. The other funds with new positions in the stock are Peter Rathjens, Bruce Clarke and John Campbell’s Arrowstreet Capital, Andrew Weiss’s Weiss Asset Management, and Gregory Fraser, Rudolph Kluiber, and Timothy Krochuk’s GRT Capital Partners.

As you can see these stocks had an average of 22.25 hedge funds with bullish positions and the average amount invested in these stocks was $382 million. That figure was $1100 million in XEC’s case. Signature Bank (NASDAQ:SBNY) is the most popular stock in this table. On the other hand Tallgrass Energy, LP (NYSE:TGE) is the least popular one with only 11 bullish hedge fund positions. Cimarex Energy Co (NYSE:XEC) is not the most popular stock in this group but hedge fund interest is still above average. This is a slightly positive signal but we’d rather spend our time researching stocks that hedge funds are piling on. Our calculations showed that top 20 most popular stocks among hedge funds returned 1.9% in Q2 through May 30th and outperformed the S&P 500 ETF (SPY) by more than 3 percentage points. Unfortunately XEC wasn’t nearly as popular as these 20 stocks and hedge funds that were betting on XEC were disappointed as the stock returned -15.2% during the same period and underperformed the market. If you are interested in investing in large cap stocks with huge upside potential, you should check out the top 20 most popular stocks among hedge funds as 13 of these stocks already outperformed the market so far in Q2.