Central Garden & Pet Co (NASDAQ:CENT) was in 16 hedge funds’ portfolios at the end of March. CENT shareholders have witnessed a decrease in hedge fund sentiment in recent months. There were 24 hedge funds in our database with CENT holdings at the end of the previous quarter. Our calculations also showed that CENT isn’t among the 30 most popular stocks among hedge funds.

How have hedgies been trading Central Garden & Pet Co (NASDAQ:CENT)? 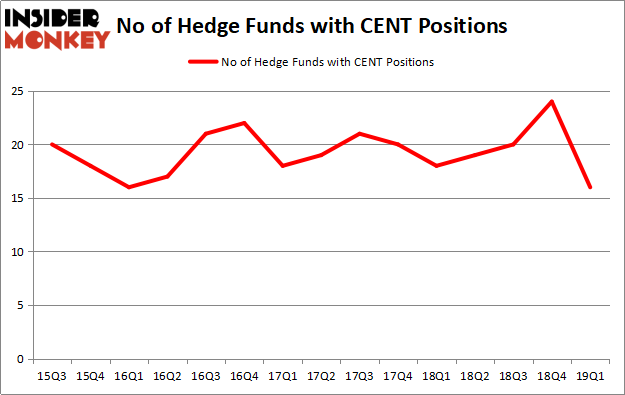 Judging by the fact that Central Garden & Pet Co (NASDAQ:CENT) has experienced falling interest from the entirety of the hedge funds we track, we can see that there lies a certain “tier” of hedgies that decided to sell off their full holdings by the end of the third quarter. Intriguingly, George McCabe’s Portolan Capital Management cut the largest position of the 700 funds tracked by Insider Monkey, valued at close to $9.2 million in stock, and Mark N. Diker’s Diker Management was right behind this move, as the fund dumped about $2.6 million worth. These transactions are intriguing to say the least, as aggregate hedge fund interest dropped by 8 funds by the end of the third quarter.

As you can see these stocks had an average of 13 hedge funds with bullish positions and the average amount invested in these stocks was $110 million. That figure was $125 million in CENT’s case. MRC Global Inc (NYSE:MRC) is the most popular stock in this table. On the other hand Park National Corporation (NYSEAMEX:PRK) is the least popular one with only 5 bullish hedge fund positions. Central Garden & Pet Co (NASDAQ:CENT) is not the most popular stock in this group but hedge fund interest is still above average. Our calculations showed that top 20 most popular stocks among hedge funds returned 6.2% in Q2 through June 19th and outperformed the S&P 500 ETF (SPY) by nearly 3 percentage points. Hedge funds were also right about betting on CENT as the stock returned 10.2% during the same period and outperformed the market by an even larger margin. Hedge funds were rewarded for their relative bullishness.