We at Insider Monkey have gone over 738 13F filings that hedge funds and prominent investors are required to file by the SEC The 13F filings show the funds’ and investors’ portfolio positions as of March 31st. In this article, we look at what those funds think of Callaway Golf Company (NYSE:ELY) based on that data.

Is Callaway Golf Company (NYSE:ELY) an excellent investment right now? Prominent investors are becoming more confident. The number of long hedge fund positions improved by 3 lately. Our calculations also showed that ELY isn’t among the 30 most popular stocks among hedge funds. ELY was in 26 hedge funds’ portfolios at the end of March. There were 23 hedge funds in our database with ELY positions at the end of the previous quarter.

What does the smart money think about Callaway Golf Company (NYSE:ELY)?

At Q1’s end, a total of 26 of the hedge funds tracked by Insider Monkey held long positions in this stock, a change of 13% from the fourth quarter of 2018. On the other hand, there were a total of 17 hedge funds with a bullish position in ELY a year ago. With hedgies’ capital changing hands, there exists a few notable hedge fund managers who were adding to their holdings substantially (or already accumulated large positions). 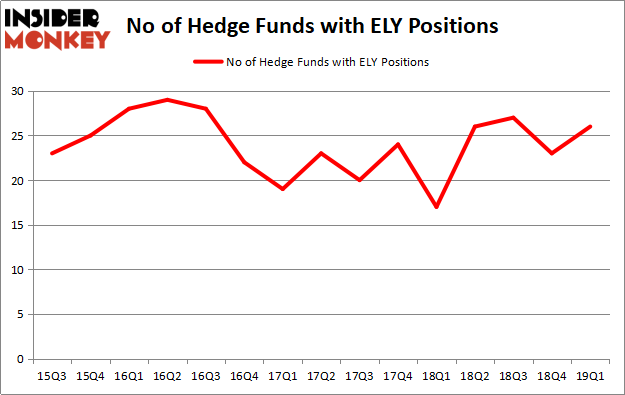 The largest stake in Callaway Golf Company (NYSE:ELY) was held by Daruma Asset Management, which reported holding $24.9 million worth of stock at the end of March. It was followed by Marshall Wace LLP with a $19.2 million position. Other investors bullish on the company included Millennium Management, 1060 Capital Management, and Arrowstreet Capital.