The market has been volatile in the last 6 months as the Federal Reserve continued its rate hikes and then abruptly reversed its stance and uncertainty looms over trade negotiations with China. Small cap stocks have been hit hard as a result, as the Russell 2000 ETF (IWM) has underperformed the larger S&P 500 ETF (SPY) by nearly 9 percentage points. SEC filings and hedge fund investor letters indicate that the smart money seems to be paring back their overall long exposure since summer months, though some funds increased their exposure dramatically at the end of Q4 and the beginning of Q1. In this article, we analyze what the smart money thinks of BioDelivery Sciences International, Inc. (NASDAQ:BDSI) and find out how it is affected by hedge funds’ moves.

BioDelivery Sciences International, Inc. (NASDAQ:BDSI) was in 18 hedge funds’ portfolios at the end of March. BDSI investors should pay attention to an increase in hedge fund sentiment recently. There were 15 hedge funds in our database with BDSI holdings at the end of the previous quarter. Our calculations also showed that BDSI isn’t among the 30 most popular stocks among hedge funds. 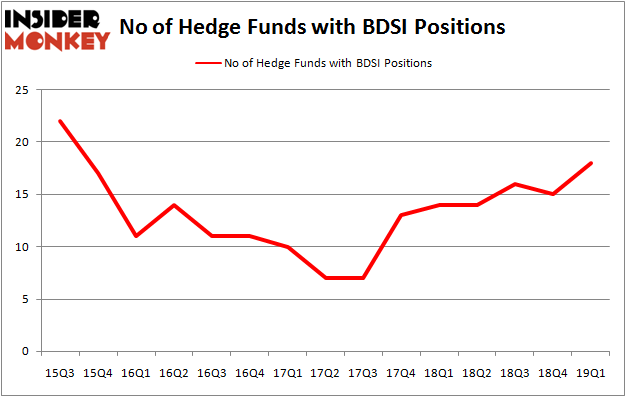 As industrywide interest jumped, some big names have jumped into BioDelivery Sciences International, Inc. (NASDAQ:BDSI) headfirst. Renaissance Technologies, managed by Jim Simons, assembled the most valuable position in BioDelivery Sciences International, Inc. (NASDAQ:BDSI). Renaissance Technologies had $2 million invested in the company at the end of the quarter. John Overdeck and David Siegel’s Two Sigma Advisors also made a $1.1 million investment in the stock during the quarter. The other funds with brand new BDSI positions are Gavin Saitowitz and Cisco J. del Valle’s Springbok Capital, Andrew Weiss’s Weiss Asset Management, and Mike Vranos’s Ellington.

As you can see these stocks had an average of 7.5 hedge funds with bullish positions and the average amount invested in these stocks was $86 million. That figure was $124 million in BDSI’s case. Old Second Bancorp Inc. (NASDAQ:OSBC) is the most popular stock in this table. On the other hand Nam Tai Property Inc (NYSE:NTP) is the least popular one with only 5 bullish hedge fund positions. Compared to these stocks BioDelivery Sciences International, Inc. (NASDAQ:BDSI) is more popular among hedge funds. Our calculations showed that top 20 most popular stocks among hedge funds returned 1.9% in Q2 through May 30th and outperformed the S&P 500 ETF (SPY) by more than 3 percentage points. Unfortunately BDSI wasn’t nearly as popular as these 20 stocks and hedge funds that were betting on BDSI were disappointed as the stock returned -20% during the same period and underperformed the market. If you are interested in investing in large cap stocks with huge upside potential, you should check out the top 20 most popular stocks among hedge funds as 13 of these stocks already outperformed the market in Q2.