Is BHP Group (NYSE:BBL) a healthy stock for your portfolio? The smart money is becoming more confident. The number of long hedge fund bets inched up by 6 recently. Our calculations also showed that BBL isn’t among the 30 most popular stocks among hedge funds.

At Q1’s end, a total of 21 of the hedge funds tracked by Insider Monkey were bullish on this stock, a change of 40% from the fourth quarter of 2018. The graph below displays the number of hedge funds with bullish position in BBL over the last 15 quarters. With hedge funds’ sentiment swirling, there exists a select group of noteworthy hedge fund managers who were adding to their holdings considerably (or already accumulated large positions). 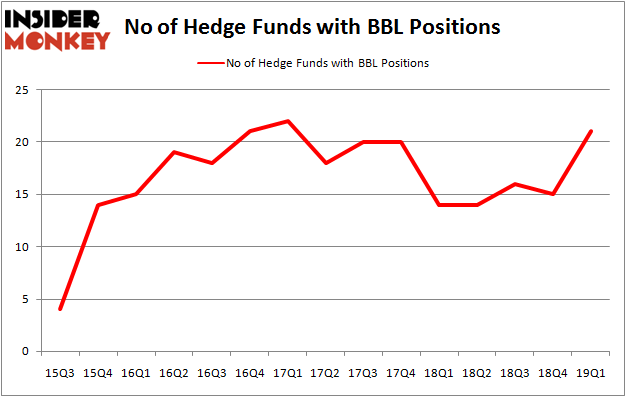 With a general bullishness amongst the heavyweights, key hedge funds were breaking ground themselves. York Capital Management, managed by James Dinan, created the biggest position in BHP Group (NYSE:BBL). York Capital Management had $98 million invested in the company at the end of the quarter. Jonathan Barrett and Paul Segal’s Luminus Management also initiated a $13.6 million position during the quarter. The other funds with new positions in the stock are Michael Hintze’s CQS Cayman LP, Paul Marshall and Ian Wace’s Marshall Wace LLP, and Robert B. Gillam’s McKinley Capital Management.

Let’s go over hedge fund activity in other stocks – not necessarily in the same industry as BHP Group (NYSE:BBL) but similarly valued. We will take a look at Paypal Holdings Inc (NASDAQ:PYPL), DowDuPont Inc. (NYSE:DWDP), PetroChina Company Limited (NYSE:PTR), and 3M Company (NYSE:MMM). This group of stocks’ market valuations are closest to BBL’s market valuation.

As you can see these stocks had an average of 52.25 hedge funds with bullish positions and the average amount invested in these stocks was $1522 million. That figure was $948 million in BBL’s case. Paypal Holdings Inc (NASDAQ:PYPL) is the most popular stock in this table. On the other hand PetroChina Company Limited (NYSE:PTR) is the least popular one with only 12 bullish hedge fund positions. BHP Group (NYSE:BBL) is not the least popular stock in this group but hedge fund interest is still below average. This is a slightly negative signal and we’d rather spend our time researching stocks that hedge funds are piling on. Our calculations showed that top 20 most popular stocks among hedge funds returned 1.9% in Q2 through May 30th and outperformed the S&P 500 ETF (SPY) by more than 3 percentage points. Unfortunately BBL wasn’t nearly as popular as these 20 stocks (hedge fund sentiment was quite bearish); BBL investors were disappointed as the stock returned -5.5% during the same time period and underperformed the market. If you are interested in investing in large cap stocks with huge upside potential, you should check out the top 20 most popular stocks among hedge funds as 13 of these stocks already outperformed the market so far in Q2.